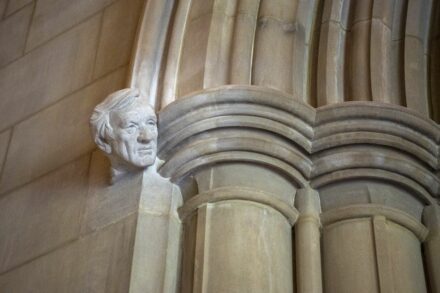 The house of worship sees itself as a place to pray to God, but also to engage the earth against “hatred, bigotry and anti-Semitism“

For several months now, the Washington National Cathedral in the U.S. capital has featured a bust of Elie Wiesel, Holocaust survivor, Nobel Peace Prize laureate and fighter against injustice of all kinds. Created by sculptor Sean Callahan from a model by Chas Fagan, the sculpture is located at the so-called Human Rights Porch. There, it pays tribute to individuals who have worked “for human rights, social justice, civil rights, and the welfare of other human beings,“ according to a Cathedral press release. Other busts there depict Rosa Parks, Mother Teresa, Jonathan Daniels, or Eleanor Roosevelt.

Elie Wiesel was born in Romania in 1928 and deported with his family to the Auschwitz and Buchenwald death camps in 1944. He described his experiences in the camps in the book “Night”.

Wiesel understood his survival as an obligation to put himself in the service of humanity and human rights. He wanted humanity to learn from history and to realize what people can do to other people and thus to the world.

“We are humbled to welcome his likeness to the Cathedral and pray that his example and legacy will be a blessing and an inspiration to all who enter,“ said the dean of the Cathedral, The Very Rev. Randolph Marshall Hollerith. 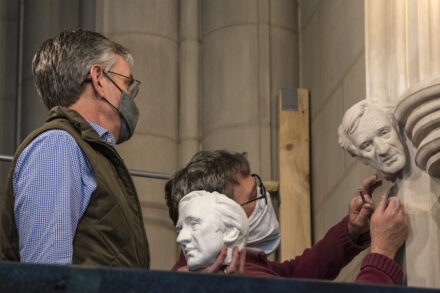 The house of worship, located at 3101 Wisconsin Ave, understands its role far more openly than most other houses of a religion. “The presence of Wiesel’s likeness alongside other prominent human rights defenders from multiple faith traditions underscores the Cathedral’s commitment to standing up against hatred, bigotry and anti-Semitism,” the press release states. “Inspired by Wiesel’s life’s work and legacy, the Cathedral is committed to sustained interfaith dialogue and action to ensure the progress that he fought for in life is protected .“

Hundreds of sculptures are found, as is common in cathedrals, scattered throughout the building inside and out, including figures from the Bible, saints of Christianity, and figures from American history such as Abraham Lincoln and Martin Luther King Jr.

Occasionally, seriousness and earthiness are replaced by sheer fun, as is usual with cathedrals: since there was a competition for new gargoyles in the 1980s, there is a bust of Darth Vader, the villain from the movie Star Wars, at one point at the very top of the northwest tower – “on the dark side of the cathedral.“ It can only be seen with binoculars but is presented on a web page of the cathedral with a fun video.