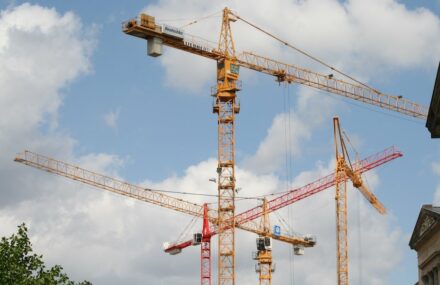 The number of hotel openings in Europe is expected to hit an all-time high in 2021, with more than 100,00 new rooms estimated for the year, according to a STR analszis. The pace is not expected to slow significantly in 2022, with a further 100,000 new rooms anticipated. On other continents, hotel construction is on a decline, as the market researchers stated in previous press releases.

The current delivery problems in Chinese ports are putting the brakes on international container handling. It will take a few weeks for the consequences to be felt abroad as well, according to the Container Handling Index of the German Leibniz-Institut für Wirtschaftsforschung and the Institut für Seeverkehrswirtschaft und Logistik (German).

The Italian initiative Pietra Naturale Autentica will participate at the Fuorisalone during the Salone del Mobile in Milan with examples of city and street architecture using marble (Italian).

Wadi Rum, a mountainous desert in Southern Jordan, has inspired many filmmakers for a Mars scenery, among them Ridley Scott, director of The Martian.

The Stone Mountain Memorial Association in Georgia, USA, has approved a new logo without the carving of 3 Confederate generals. A museum at the foot of the popular tourist attraction will inform about the history (1, 2).

Researchers discuss the idea to extract CO2 from the atmosphere by using a mineral called peridodite. The idea had first been proposed in 2008 in the Proceedings of the National Academy of Sciences.
(1, 2).

The ancient white marble sculptures at New York City’s Metropolitan Museum of Art had originally been painted, as said in a video.

Video of the month: how British sculptor Tom Waugh carves the form of a plastic fork out of Italian marble (1, 2).