The campaign “It’s Natural – Brazilian Natural Stone“ is intended to open up new markets, especially for the country’s quartzites 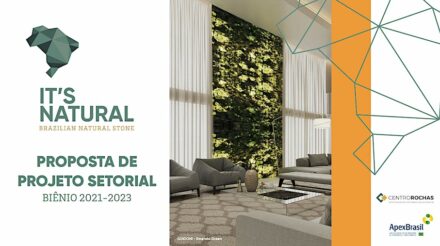 But now with determination: the Brazilians want to conquer markets all over the world with their natural stones. This is how the new campaign “It’s Natural – Brazilian Natural Stone“, launched by the Centrorochas association in May 2021, can be summed up.

Supported by the foreign trade organization Apex, it wants to get away from the previous monoculture in exports – exports of slabs only to the USA, blocks (almost) only to China – and likewise from the fatal monoculture in stone types. For it is not really known all over the world that Brazil, besides granites, also has exceptional quartzites and even marble varieties and more.

Regarding the background of the campaign: until now, Apex had cooperated with the Abirochas association. In recent years, export figures of close to US$ 1 billion per year had been achieved. Recently, however, shipments abroad had remained at this level, and, above all, the country had not managed to free itself from monoculture.

We spoke to Fabio Cruz, Vice President at Centrorochas and the leader of “It’s Natural – Brazilian Natural Stone“, about the new campaign. And the man in his early-forties goes right out on a limb with a statement: “One of our goals is to achieve enhancement and empowerment among export companies.”

In other words, it’s not just about pumping Apex’s money into marketing in new markets, but first and foremost about making the companies fitter to do business there.

That relates to the thinking within companies. Cruz cites as an example, “a lot of companies don’t really have data on their markets.“

Figuratively speaking, Brazil sends out its salespeople to distribute samples of its natural stones in the United States. When they come back with orders from dealers or fabricators, everyone is happy.

Now the campaign wants to know more about a target country itself and the consumers there. So: instead of just distributing samples, they want to find out what else might interest a customer in terms of service, logistics or products.

So, as one of the first steps of the campaign, Centrorochas had the market in the Middle East analyzed and will soon participate in a trade delegation to Dubai. There, architects from the United Arab Emirates will be informed about quartzites.

Of course, this will not be done in the context of dry workshops, but small receptions.

But the tone is not samba-like, however. “We want to learn what language our new target groups speak,“ Cruz says, citing one of the goals.

Eight priority target countries have been identified, including India, Italy, Mexico, the United Kingdom and Russia in alphabetical order, in addition to those mentioned before.

Cruz’s credo also revolves around targets of a non-geographic nature. This means, for example, the domestic design scene, specifically interior design, and furniture trade shows. For example, Centrorochas has just signed a collaboration with Abimovel. This is the association of the furniture industry.

But here, too, the thinking is complex: primarily, this cooperation is not at all about more natural stone being used in tables or home accessories. “First and foremost, we want to get closer to the creative people,“ says Cruz.

In summing up the efforts of Brazil’s stone companies over the past 10 years, he comments, “it’s not enough to invest in new machinery.“ In fact, the industry had undergone unprecedented technological modernization. However, this has been reflected more in the fact that companies are now competing with each other even more, rather than finding new markets.

So, of course, we must conclude by asking a question: how is it that Brazil’s stone industry has never been able to bring its sheer power to markets worldwide?

Cruz does not hesitate: “The US market made it too easy and spoiled us.”