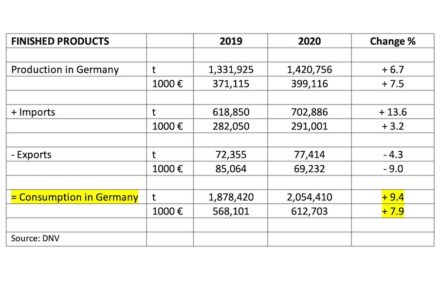 Especially domestic producers benefited and increased by +7.5% by value

Meanwhile, a first conclusion can be drawn about the Covid-19 year 2020: although exports and international trade in natural stone decreased by (-)16% for many countries, domestic consumption experienced an increase. This can be seen In relation to Germany from the figures of the DNV association: in 2020, domestic consumption increased by a strong +7.9% (by value) and +9.4% (by tonnage) compared to the previous year. That was a good €612 million and about 2.054 million tons, respectively.

Moreover: the production of the domestic companies of processed stones increased strongly as well by +7.5% (by value) and +6.7% (by tonnage).

Two events are reflected in these figures: firstly, due to the lockdown in Germany as well as worldwide, there was an increased interest from private individuals in beautifying their homes with natural stone – there was money available that citizens would otherwise have spent on vacation and travel, for example.

In addition, the pandemic (and subsequently the blockage of the Suez Canal) had upset the worldwide transport economy, so that natural stone dealers ran into supply difficulties and offered customers domestic materials as alternatives to imports.

Even large building material dealers made this turn, at least in Germany.

It is also known that numerous hotels took advantage of the lockdown to modernize their bathrooms, for example. 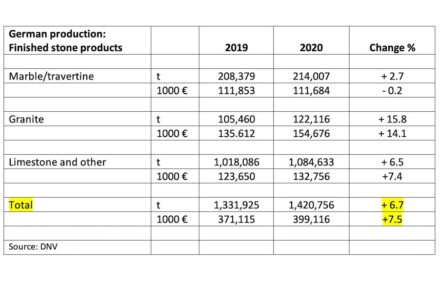 All in all, Germany is almost a giant under a cloak of invisibility when it comes to natural stone: for decades, the association has recorded a relatively stable consumption of around €600 million per year. By tons, the country comes close to the 2 million mark, which it was able to surpass for the first time last year.

In respect of its exports of natural stone, Germany is very inconspicuous. In 2020, they fell by (-)9% in value and by (-)4.3% in tonnage because of Covid-19. However, there are now a number of companies exporting that have earned a good image with reliability and accuracy on major construction projects.

In view of the current political situation, Reiner Krug, Managing Director at the association, views the export weakness with equanimity: “It would be desirable if the industry exported more,“ he states succinctly, but immediately adds that stimuli from the government are not to be expected.

After all, Germany is under pressure from other EU countries to reduce its export surpluses.

Incidentally, there were times when Germany was a major exporter of natural stone. Many of its domestic stones can be found elsewhere on buildings, for example on the facades in New York City.