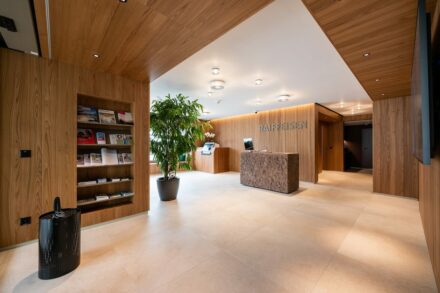 In the customer foyer, a counter stands succinctly in the room like a kitchen island, giving it the expression of intrinsic value and down-to-earthness

If you, dear reader, ever come to the small town of Kaisten on the Upper Rhine, be sure to stop by the Raiffeisenbank branch. For it is not only natural stone that has been used there in a rather unusual way. In the building, the builders and architects also provide an interesting response to increasing digitalization, which many experience as uncertainty and alienation.

The branch is located in an old farmhouse that was rebuilt under the overall supervision of the local heritage protection office (Ortsbildschutz).

There is above all the customer foyer, and in the middle of it the customer counter: it is a piece of furniture in the style of a kitchen island, which stands dominantly in the room. A more special accent is given by the local Oberhöfler reed sandstone Stuttgart Formation, with which the block is clad. “The stone conveys intrinsic value, its origin down-to-earth,“ says Marc Meier, vice branch manager at the bank.

The concept was developed together with the architectural firm Brem+Zehnder. The stone was supplied by Obrist company. 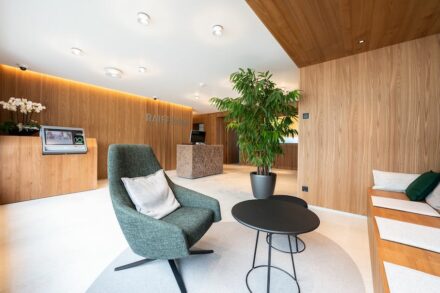 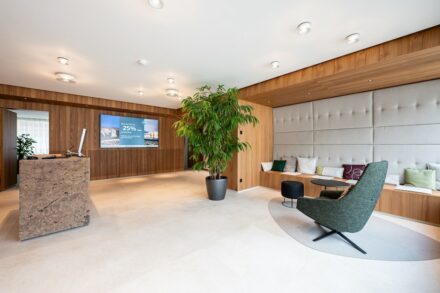 The room itself is generously designed with a seating area. The ATM is placed rather inconspicuously in a corner.

The wood paneling on the walls “radiates warmth and is reminiscent of the traditional material of the farmhouses in the village,“ says Meier. A large window, newly broken into the wall, opens the space to the outside and lets daylight in.

But that’s not all: the foyer can also be used for larger events in the village, and then people from outside can see through the window that something is going on in the bank. For such occasions, the customer counter can be rolled to the side.

In addition, there is a “public meeting room“ in the building, which associations, for example, can use for their purposes. After all, there is no longer a suitable pub in Kaisten.

The concept of such a bank for the citizens was not a new strategy specification from headquarters, but was developed locally. “We wanted to give an answer to the increasing digitalization in all areas and offer our customers more service,“ says branch manager Peter Senn.

“Conveying honesty as a message“ was the goal in terms of image cultivation. 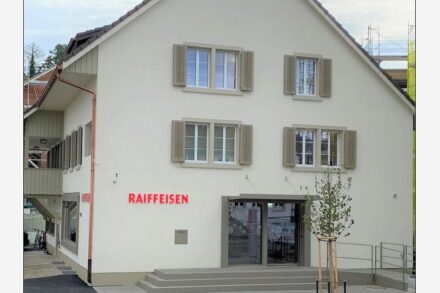 Kaisten has about 2500 inhabitants. It is located between Basel and the Rhine Falls of Schaffhausen on the Swiss side of the river and is agricultural. Geologically, it lies in the hilly landscape of the Table Jura.