Showroom of the Italian fashion company forte_forte in Rome: green onyx all over the walls and floor 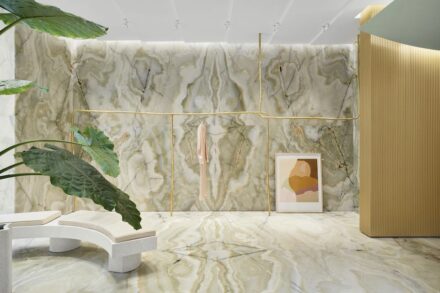 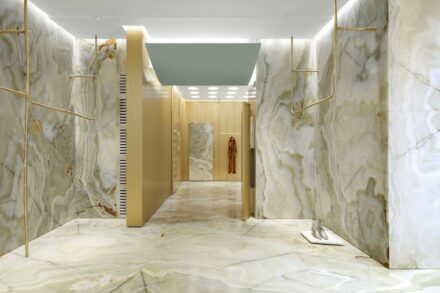 forte_forte is an Italian fashion company founded in 2002 by siblings Giada and Paolo Forte, which also includes Robert Vattilana, Giada’s life partner. The trio is dedicated to textile design for young women and their brand has now conquered markets mainly in Italy, Europe, the United States and Japan. Most recently, a showroom was opened in Rome, which we would like to present here.

According to the press materials, “green onyx creates a total immersion in the store: it drowns the entire space, from floors to walls.“ This, as usual in PR poetry, is not meant verbatim.

But still, the design of this showroom – and especially the use of natural stone here – is so unusual that it deserves a closer look. Robert Vattilana is responsible for the interior design. He is the art director in the company, Giada Forte is the designer, Paolo Forte is the business strategist. 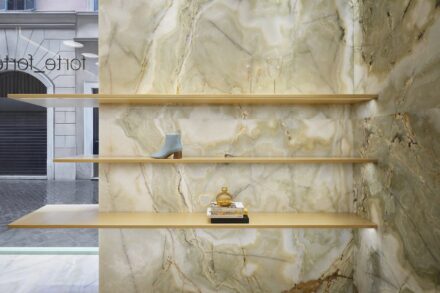 Are the many book-matches with the onyx panels overloaded and is the design ostentatious?

Rather not, we think cautiously, because we know the rooms only from photos and have not seen them with many clothes on display. But we note: the Onyx, despite the sheer abundance, seems light and weightless, unlike, e.g., a room whose walls are covered from top to bottom with marble.

The intention was to design the showroom with “focus on contrast,“ the documents say because: “In Rome contrast is always, and has always been, harmony.“

What is meant is that actually the travertine is the material of the city. This is also found on the exterior facade of the historic building with the showroom on the first floor.

In showrooms in other cities, however, forte_forte has often used the travertine.

Here, however, in via Borgognona 4 in the neighborhood on the former Mars Field, a kind of onyx cave has been created that transports the customer into another world upon entering. The 1st room is characterized by the cloudy shapes in onyx. Even the clothes racks, typically forte_forte reduced to simple brass tubes, come across as fluttering. 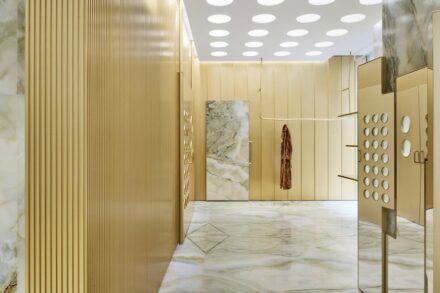 The 2nd room with the changing rooms announces itself with a clear contrast: the walls have a different color than the stone and there are dead straight lines from top to bottom.

Another contrast are the portholes, partly on the ceiling, partly in the doors of the changing rooms. 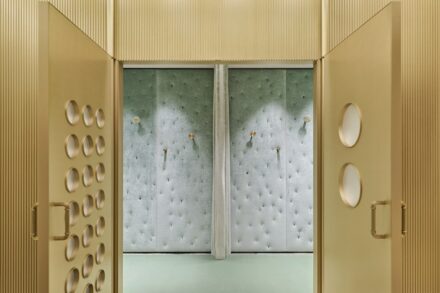 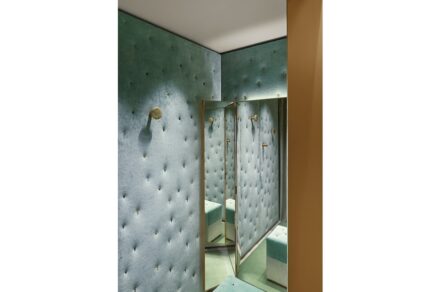 The cabins themselves have a “feminine, boudoir-like“ atmosphere, characterized by “sage-colored capitonné velvet,“ according to the documents.

We would also like to point out two striking design elements: 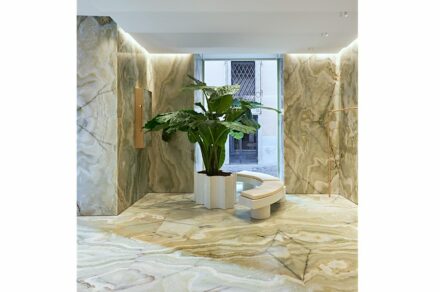 * one is the seating area typical of forte_forte with an Alocasia plant, whose huge leaves create their own accent;

* the other: the door to the storage room with its onyx cladding clearly stands out from the color tone of the surrounding wall.

The cash register is located in the rear part of the showroom. 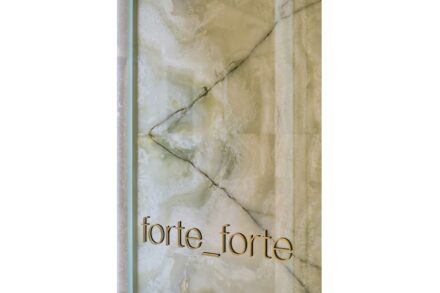 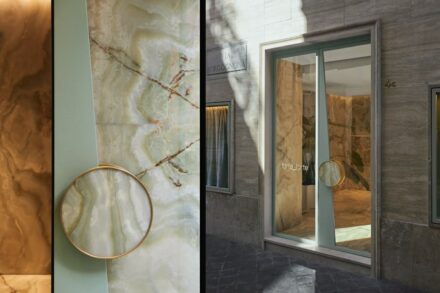