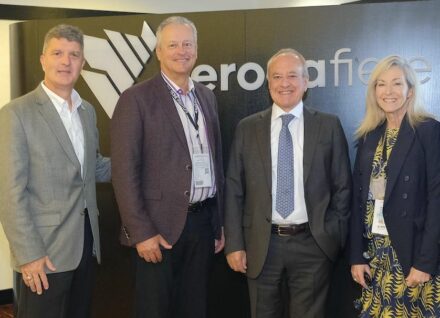 In February 2022, there will be a new type of hall called the Natural Stone Pavilion

There is movement in the field of natural stone trade shows in the USA: the International Surface Event in Las Vegas wants to expand its profile for marble, granite & Co and has won the Natural Stone Institute (NSI) as a cooperation partner for this purpose. The show traditionally consists of three focal points, namely Tile Expo, Surfaces and StonExpo/Marmomac and will take place in 2022 from 01 to 03 February. In short form, it is referred to as TISE.

However, while the appearance of the natural stone industry there has so far focused mainly on the presentation of machinery and tools, more natural stone will now be shown as such. For this purpose, there will be a new hall, which will be known under the brand name “The Natural Stone Pavilion – brought to you by the Natural Stone Institute and Marmomac“.

The new concept is based on two points: The NSI, with more than 2000 members from over 50 countries, is to publicize the new hall in its circles, and the Marmomac in Verona, for its part, wants to provide for visitors and exhibitors. It has been looking after StonExpo for years, for a while under the title of Marmomacc Americas. The third partner in the alliance is the trade fair company Informa, which organizes TISE.

A stronger presence for natural stone in Las Vegas had already been under discussion for 2020. Because of Corona, however, the fair did not take place.

For the next five years Veronafiere and Informa US could make available in total $50,000 for the promotion of the Stone Pavilion, as said in a press release.

The most important trade show for natural stone products in North America had previously been Coverings. It takes place in annual rotation in Atlanta and Orlando, respectively. Natural stone tiles and other stone products are primarily shown there, with even more ceramics and engineered stone. Their 2022 edition is scheduled for April in Las Vegas.

When asked by us, NSI CEO Jim Hieb said that “40% of the visitors to StonExpo/Marmomac wanted more natural stone.” However, exhibitors did not want to display right next to man-made materials. “So we decided to seize the opportunity to create a special pavilion dedicated to natural stone.“

To this end, the association is offering a 20% discount on the normal price of a booth for its members exhibiting in the Natural Stone Pavilion. And care has also been taken to ensure that suppliers of natural stone technology are not suddenly left behind: the members of the Stone Equipment & Supply Alliance (SESA) – let us call this organization a subdivision of the NSI for the sake of simplicity – will be making their appearance next door. The NSI itself and its “Use Natural Stone“ initiative will also be making presentations. 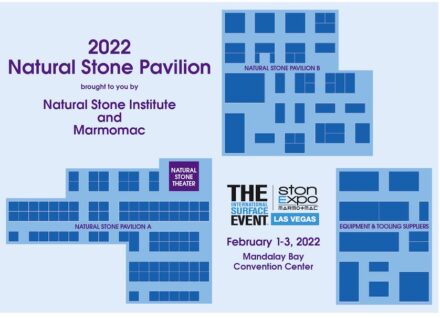 We show a preliminary hall plan, which we have taken from the NSI newsletter “The Cutting Edge“ (September 2021).

According to this plan, there will also be a “Natural Stone Theater“ in the Natural Stone Pavilion. This is reminiscent of Hall 1 at Marmomac with its design ideas. In Las Vegas, however, events for further education are to take place there. The qualification of the industry is a special concern of the NSI and also belongs to the program of both fairs.

Other fairs, which cooperate with the NSI, as for example the Coverings, are not to be affected by the new commitment of the federation, as Jim Hieb stressed.

Rather affected by it could be the planned “Stone America“, which the Italian federation Confindustria Marmomacchine wanted to set up in the context of the fair KBIS (Kitchen and Bath Industry Show) in Orlando. It was intended to give suppliers not only from Italy the opportunity to present themselves to interior designers and architects but could not be realized in the wake of the Corona pandemic.

We asked the Italian association and received a reserved answer with regard to both the new Natural Stone Pavilion in Las Vegas and KBIS: Informa, Veronafiere and the NSI had approached Confindustria Marmomacchine with the wish for cooperation, but too little was known so far about the real plans: “At the present time, while familiar with StonExpo, but not yet knowing the details of said project, we have postponed any decision regarding it until more information on this event would be made available,“ press spokesman Pasqualino Pietropaolo responded to our inquiry.

Similarly, the statement regarding Stone America in the context of KBIS: “In this case, too, we will again evaluate Confindustria Marmomacchine’s eventual involvement only when we have been apprised of the details for this new exhibition project.“