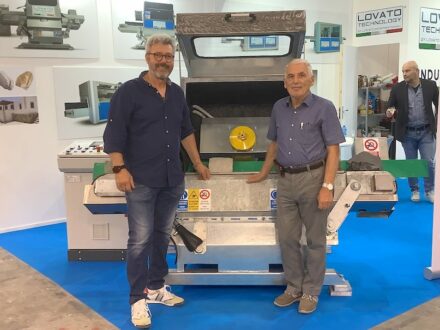 Valuable materials can be recognized by the fact that everything is recycled, and nothing is thrown away. So far, this cannot exactly be said of natural stone – far too quickly, leftover pieces end up as gravel, even if higher-value uses would be possible. This is where a machine from the Italian company Lovato Technology comes in: it can be used to cut offcuts so that they can be used, for example, as brick slips or crusts for interior wall cladding or for exterior walls.

The initial piece can have any shape.

The founder of the company, Mariano Lovato, has 30 years of experience in the Chiampo Valley on the southern edge of the Alps in the maintenance and repair of machines for processing natural stone, and has recognized the market niche. As early as 2006, he obtained a patent for his saws, which can be used, for example, to cut pebbles in half, crust pieces to uniform thicknesses, or even to cut corner pieces.

A key feature of his machine series with the unadorned designations “EVO“ or the “S“ is that they can be adapted to the customer’s wishes. 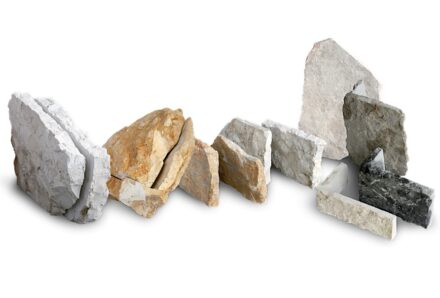 Several aspects are essential here:
* the motor itself determines the speed at which the saw runs most effectively, depending on the type of stone;
* since there are limited depths of cut in granite, for example, there are also saws with several blades in succession, each of which cuts deeper;
* for this, as well as in general, a stable position of the stone on the feeding belt is ensured, which is why the belt is inclined;
* for cutting corner pieces, two saw blades are used. 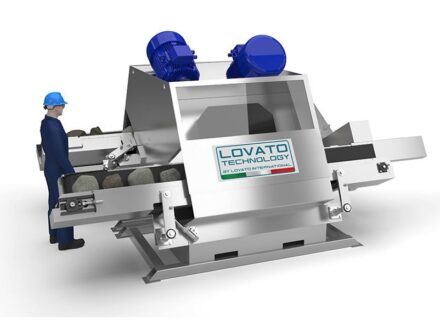 At the moment, the machine still requires a lot of manual work: on the feeding side, one worker has to load the belt (or two belts); on the unloading side, one has to quickly stow the cut lumps on a pallet.

Other features of the machines (according to the Italian “Transition 4.0“ specifications) are:
* touchscreen control panel,
* simple and intuitive man-machine interface,
* connection to the company network connected via Ethernet or WIFI,
* remote maintenance and control,
* for each copy, there is a maintenance schedule that can be operated by touch screen and that triggers a signal when maintenance is due.

Lavato says its saws allow about 80% of the waste to be recycled in the quarry or stonemasonry shop. Conventional saw blades are used.

Not only smooth cutting surfaces are possible. A hybrid version of the machine can also additionally cut grooves into the sawn surface. These are necessary if the stone is to be bonded outdoors.

Thicknesses from a minimum of 1 cm to a maximum of 10 cm are common. “But we can also build models for other thicknesses,“ emphasizes Lovato in conversation at his booth at Marmomac 2021.

Currently, his overarching goal is to automate the entire process and have machines do the manual labor for both loading and unloading.

In the meantime, he has sold his rustic machines as far away as the United States.