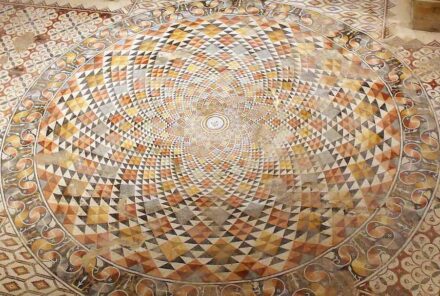 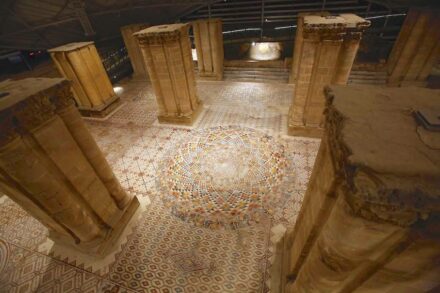 The complex, dating from the early days of Islamic art, has been roofed over and given an elevated walkway for tourists to enjoy

Not far from Jericho in the West Bank, the largest ancient mosaic in the Middle East, which is also a special example of early Islamic art, can now be seen once again: It is located in Hisham’s Palace and has been given a wide-span canopy so that it is protected and yet accessible to tourists.

The mosaic adorns the floor in the baths belonging to the former palace and extends between sixteen columns over an area of about 830 m² (nearly 9,000 square feet). It shows a variety of geometric shapes and also plant motifs. A highlight is the depiction of the “Tree of Life“: on one side of its trunk, two gazelles represent peace, while the other side is about a lion killing a deer, and thus about war. 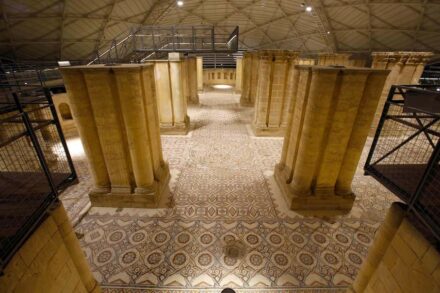 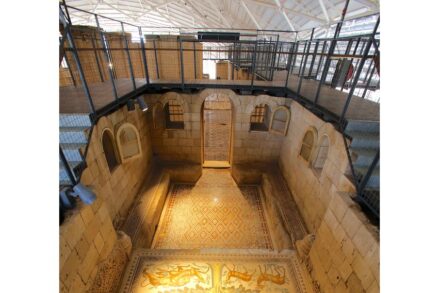 The material of the mosaic is diverse types of stones with twenty-one colors, all of which come from the region. It consists of about five million individual stones (tesserae).

The mosaic had already been discovered and excavated in the 1930s. Later, the desert sand covered it up again, but the tour guides liked to bring the visitors to this point. In the process, tourists repeatedly made their own way and removed the sand over the mosaic, causing damage to the artwork.

Later, Palestinian authorities were able to enlist the Japan International Cooperation Agency (JICA) to protect the mosaic. Following preliminary work from 2016 onward, some US$12 million was allocated to roof over the site and upgrade it to meet the expectations of today’s tourists.

At the heart of the measures is the cantilevered dome, which on the one hand allows for ventilation, but on also ensures a constant microclimate. Numerous questions of detail had to be resolved, such as how to keep birds from nesting between the roof struts.

For visitors, there is a course that takes them up stairs and ramps to prominent points above the mosaic. Wheelchair users have access to at least those spots.

Other measures include lighting or fire protection.

Special efforts were made to secure the sixteen massive columns from ancient times. Their material was secured, and they were also given a steel bar on the inside – this extends deep into the foundation and takes account of the fact that the Jordan Valley with the city of Jericho is very much at risk from earthquakes. The Great Rift Valley runs through here.

The Japanese organization’s participation in the project is related to the concept of the Palestinian Ministry of Tourism and Antiquities. Its approach is to make the numerous historical sites in the region accessible to visitors without immediately destroying them. Palestine does not have the funding for such sustainable development.

In addition to construction, the Japanese agency has facilitated extensive preliminary studies, such as what type of roof would best meet the needs and how to best meet the desires of tourists as well.

For example, there are display boards along the route that provide information about the specific features of the mosaic and the entire site. 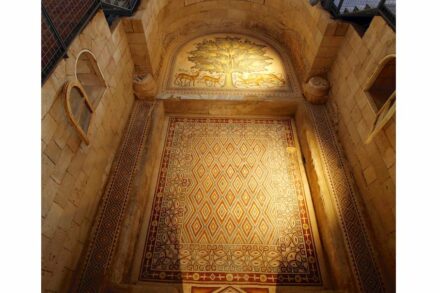 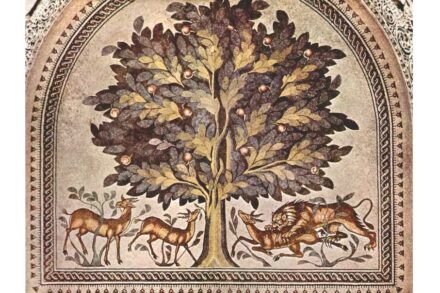 Hisham’s Palace was probably built between 724 and 744 AD. The name comes from a marble shard found there. Together with other clues, archaeologists therefore suspect that the Caliph Hisham ibn Abd al-Malik, and perhaps his nephew and successor Walid ibn Yazid, were the builders. Both were from the Umayyad dynasty.

The complex exists only in ruins. It is located 3 km from downtown Jericho and includes the palace building, the bathhouse with the mosaic, a mosque, a pavilion, and recently constructed service buildings with administrative or sanitary facilities.

Numerous similar complexes, with more or less fortified character, have been preserved from the Umayyad dynasty in today’s Middle East. They are referred to as Desert Castles.

In May 2021, the Palestinian authorities submitted Hisham’s Palace for UNESCO World Heritage listing.

The Umayyad dynasty was the second caliphate in a succession of five that formed after the death of the Prophet Muhammad. It had its greatest extent around 750 AD and stretched from India’s border across the Arabian Peninsula and North Africa to Spain. It was an empire of many peoples, cultures, and religions, characterized by tolerant interaction. Some historians see the period as the genesis of Islamic art. 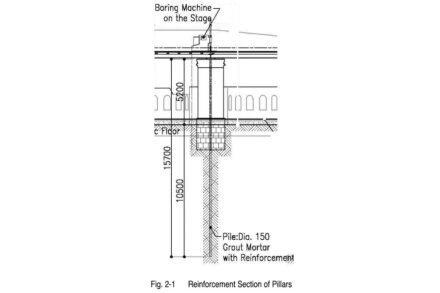 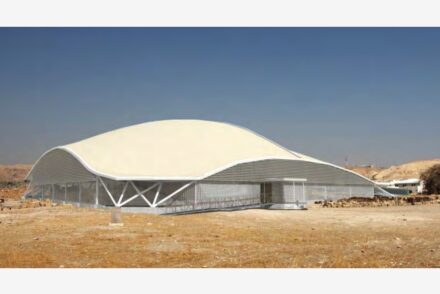