Peter’s Corner: the Marmomac Icon Award of the year 2021, the plastic table lamp “Teddy Boy“ enlarged in stone, is a disaster for the entire sector 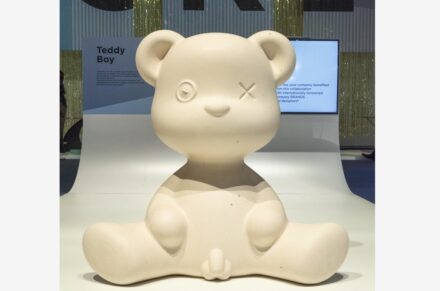 What actually is the image that the Marmomac fair has of natural stone?

This question must be asked seriously in view of the Icon Award of the year 2021, selected was the “Teddy Boy“. It is the stone copy, enlarged to a height of about one meter of that table lamp by designer Stefano Giovannoni, in the original 32 cm high and made of translucent plastic with built-in LED lighting.

The stone object, which won the Icon Award, will be used for Marmomac’s self-advertising in 2022, so it can be seen around the world, making a significant contribution to how the natural stone sector is understood.

Did Marmomac want to prove that stone companies have also mastered copying, just as the ceramics industry has been doing for years with genuine marbles, granites, and other varieties?

After all, copying objects in other materials tends to stand for a lack of imagination. 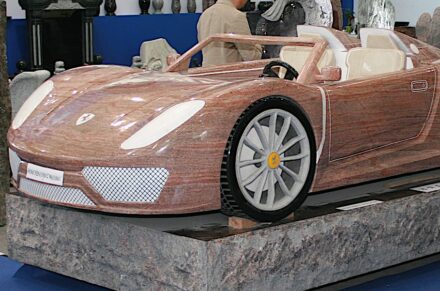 Just think of the grandiose imitations of entire cars or motorcycles that used to be big attractions at stone fairs and which, fortunately, were rarely seen lately. 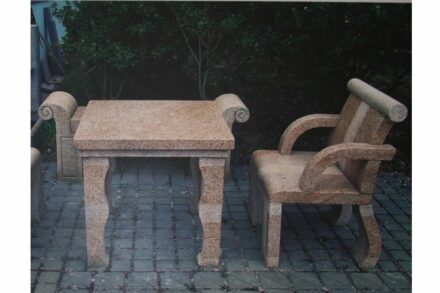 Because they were and are only ridiculous objects that have nothing to do with art or design and with which a fair like the Marmomac – of course – never adorned itself.

Let us remember: the “Made in Italy“ and the “Italian Excellence“ that the fair in Verona has always focused on, always wanted to show the world’s top level both of skill in workmanship and of style and elegance.

And now the Teddy Boy in stone?

This unfortunate object surprises us all the more because the Testi Group produced it. 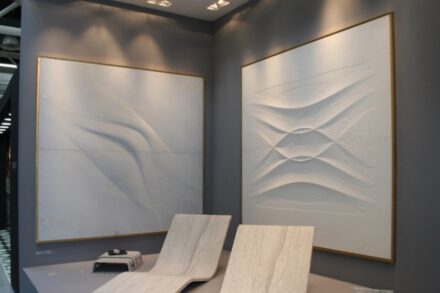 The Testi Group, which in the past, for example, in cooperation with the architects of Pongratz Perbellini, had set important milestones for the development of the stone industry with its “Hyperwave“ structures.

Insertion here: the trade fair company will remark at this point at the latest that this year’s Icon Award did not come from them but was selected by visitors at the trade fair and on Instagram.

To which we counter: we had not even found the stations for voting on the exhibition grounds ourselves. And, off the record: an experienced organizer already has the desired result in his pocket before he lets the guests vote…

That is why we take the Teddy Boy so seriously.

We see it as the culmination of a fatal development that characterizes Marmomac: it does not show natural stones as valuable materials that can be used in everyday life and that enhance this everyday life.

It shows them like plastic, which serves as a toy for a moment and then is already thrown away.

This view has almost taken over in recent years with the show Brand&Stone, curated by Giorgio Canale from a concept by Danilo di Michele, at the actually commendable Italian Stone Theatre.

The Teddy Boy as Icon Award, as it had now been produced for the third edition of Brand&Stone, is only the consistent endpoint of this disastrous path. We repeat: disastrous.

Because: How might an architect or designer somewhere in the world react when he sees the well-known table lamp Teddy Boy now in stone (which in the original is made of polyethylene and costs around 129 €, of which there is also a Teddy Girl (169 €) and a variant with a metal cover (300 €))?

Does the block show him the creativity of the stone industry? Does he learn what you can do with stone? Does he become aware of the value that characterizes the material natural stone?

Probably a successful architect and designer just turns away shaking his head and towards the engineered stones or the ceramic materials that present him with practical and beautiful design objects or ideas for kitchens and bathrooms.

Let us look back at two of the Icon Awards from the last few years: 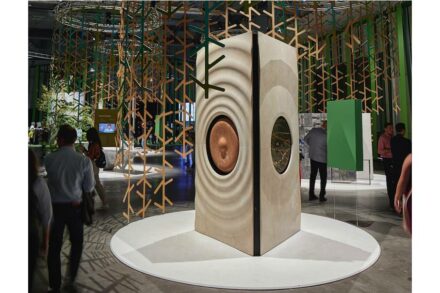 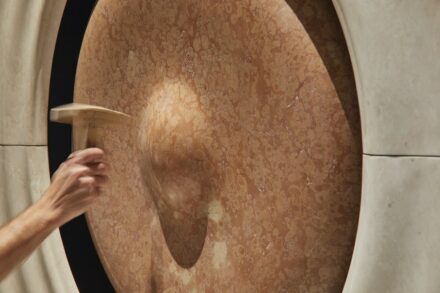 * 2019 were awarded the sound plates “Gerico“ (designer Lorenzo Palmeri, produced by Vicentina Marmi in collaboration with Donatoni Macchine). The installation showed that stone can also have “a voice“ when struck with a hammer, as the description said. It was experimental; 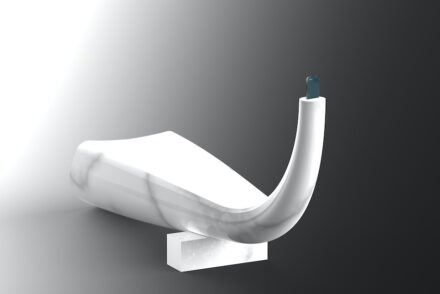 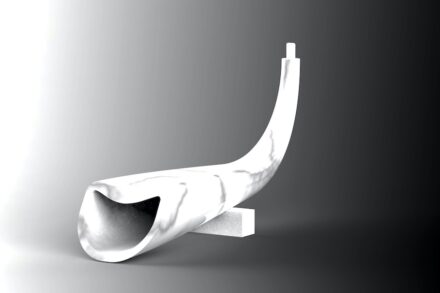 * in 2016, “Panca Play“ by designer Denis Santachiara (Costa Paolo company) had won the prize. One saw a tiny cell phone, whose messages a huge marble tube as an amplifier trumpeted out into the world.
Admittedly, this was not really product design, i.e., an object that could be used in everyday life. But it was art, namely funny, looking with derision at the development of the world and perhaps even with self-irony at the stone sector.

Well. Perhaps this Icon Award also holds a mirror up to Marmomac.