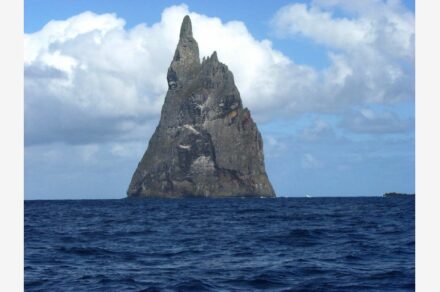 Ball’s Pyramid is a 560 m high spectacular rock in the Pacific Ocean between Australia and New Zealand. It is a remnant of a shield volcano that was active more than 6 million years ago. It is surrounded by the Lord Howe Island Marine Park.

How a small Georgia county fought off a granite quarry project is reported in a transcript of Georgia Today, a weekly radio show and podcast on Georgia Public Broadcasting.

FIGSI, the Federation of the Indian Granite and Stone Industry, held a seminar with guests from the Karnataka government to discuss „Challenges and opportunities of the Dimensional Stone Industry.“

The spectacular translucent marble facade for the Ronald O. Perelman Performing Arts Center in Manhattan is half finished (1, 2).

Nasa has launched its Double Asteroid Redirection Test (DART), the first mission to test technology for defending Earth against potential asteroid or comet hazards. A known asteroid that is not a threat to Earth shall be hit by the spacecraft with the goal to slightly change its motion in a way that can be accurately measured using ground-based telescopes (1, 2).

The Rookwood Cemetery in Sydney, Australia, has published a call for stonemasons from New South Wales for the 2nd issue of its carving competition. The works of the 2021 participants are presented on the webpage.

In the 18th century, sculptors such as Antonio Canova often used wax or grind water to subtly tint their figures’ marble. In a lecture held at the Institute of Fine Arts, New York University in 2015, Christina Ferando, a specialist in 18th- and 19th-century art, discussed the viewers’ discomfort with such surface treatments.

The Global Holcim Award Gold doted with US-$150.000 was bestowed to a project in Switzerland where old building materials and elements were reused.

Video of the Month: CBS News tells the story of how a lost mosaic from the Roman emperor Caligula‘s reign ended up entertaining guests in a New York City apartment and was finally rediscovered.