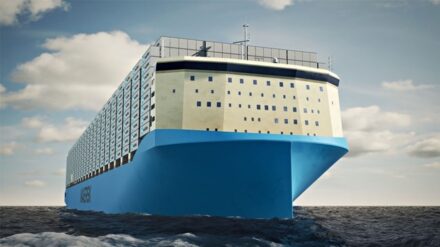 The world’s largest transport company is having 8 new container ships built, which will have a long-term impact on the entire transportation sector

A ground-breaking development in climate protection comes from Denmark: there, the world’s largest shipping company Maersk wants to switch to “green“ methanol as fuel in the future and thus achieve zero CO2 emissions for its transports.

Specifically, in August 2021, A.P. Moller – Maersk announced that it had ordered 8 new container ships whose engines will run on such fuel. The first of these giants is to be delivered in 2024, in exchange for which old ships are to be decommissioned.

Maersk has secured the initial 10,000 tons of the “green“ methanol it needs in a contract with Reintegrate. This is a subsidiary of the Danish company European Energy, which specializes in renewable energies.

Methanol is an alcohol and closely related to ethanol, which is known from wine and beer, where, enjoyed in dilution and in moderation, it makes people merry.

Methanol, with the chemical formula CH3OH, is already produced in large quantities today – the decisive factor for whether it can be called “green“ is the energy used for its chemical production, specifically: electricity from solar cells or power plants for wind or water-power, or from biomass.

Methanol is a well-known fuel. There is a standard for it in the EU under the name M100. In China, field trials are underway with vehicles powered by methanol.

Only CO2 and H2O come out of the exhaust, which can then be used to produce methanol again. The advantage over hydrogen (H2) is that methanol is easier to handle.

Maersk’s decision is important for the natural stone industry in that the market leader is sending an important signal to the global transportation industry.

In the future, buyers of natural stone will also select suppliers on the basis of whether they have chosen a climate-neutral means of transport.

This is because clients want to obtain certificates such as LEED, BREEAM, etc. for their buildings, because this makes it easier to sell or rent out the properties.

Maersk’s decision is also interesting insofar as domestic natural stone loses its great environmental advantage in life cycle assessments compared with deliveries from abroad. However, overall transportation will become more expensive because the prices of cheap marine diesel will no longer be achievable.

In the case of stone, the news will presumably only affect the market opportunities of the so-called commodities, i.e., cheap varieties that have so far been available in large quantities around the world.

Stones with a big name or exotic appearance will not be affected, even if they become more expensive.