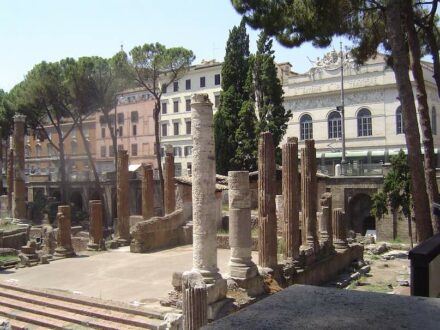 Recycling of building materials was also an important topic in ancient Rome, but not for ecological reasons. The diversity of the ancient builders’ considerations and their methods are explored by Stephan Zink, research associate at the German Institute for Archaeology. In a text in the journal “Archäologie Weltweit“ (1/2021), he describes them using the example of Temple A on the southern Field of Mars in ancient Rome.

Around 100 B.C., this temple was completely renovated. It is one of the oldest sacred buildings on the Field of Mars. It is not known to which god it was dedicated in the past, therefore, together with three other temples on the site (today: Largo Argentina), it bears the designations from A to D among archaeologists worldwide.

For the renewal large parts of the predecessor building were removed, as Stephan Zink writes. This involved downcycling: many of the stone elements were broken into portable chunks and used to fill in the new foundation pits.

This is pleasing for today’s archaeologists, as they can find evidence of the previous building.

Some of the broken pieces from the construction work were also processed into crushed stone and added to the Roman concrete (opus caementicium) for the new temple.

At that time there were two reasons for this recycling: on the one hand it was to avoid costs for building material, on the other hand a transport to a waste dump would have been much too expensive. Because transport possibilities and capacities were scarce in the antiquity and afterwards, this in particular by the narrow roads of the large city Rome.

At Temple A, however, there was also the actual recycling, that is, a reuse of material in a similar function as before. The new building was to have a monumental staircase as an entrance, and for this the steps of the old building were used, which had previously been secured with all due care.

And not only the stairs were given back their old function. The entire cellar of the old temple, i.e., its interior, was integrated into the new building.

Stefan Zink suspects that cost considerations were not the only reason behind this aspect of recycling. “The steps and the cellar were almost a kind of relics,“ he writes, “they were, so to speak, sacrally charged and should therefore be preserved over the ages, even if the building material was actually by now no longer ‘state of the art’.“

A similar situation was repeated in 80 AD, when the temple was severely damaged in a devastating conflagration. As a reminder, Rome at that time consisted largely of multi-story tenements made of wood, and when a fire broke out somewhere, it ate through large parts of the city under unfavorable conditions, destroying even the structures made of stone. 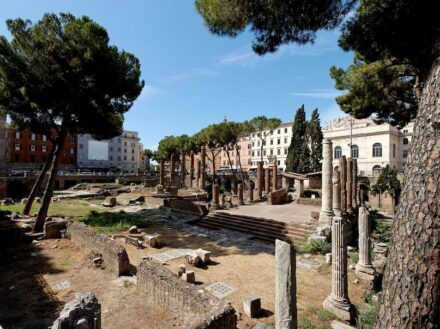 When rebuilding Temple A, the architect again left as much of the old substance as possible. Only when one of the old columns made of tuff was no longer structurally safe, he replaced it with a new one made of travertine – which, however, was not new at all, but had already served in another building.

However: the fire had brought great destruction with it, and so there was now a layer of rubble of about one meter on the ground in the area around the temple. This could not simply be removed, see above.

So, the new building was built on the new level.

But this meant that the old columns, which were standing in the rubble, were suddenly too short for the desired height. Stephan Zink describes the solution found by the Roman builders as “hardly to be surpassed in pragmatism and efficiency“: the builders simply placed extensions made of travertine on top of the old tufa columns.

But so that nothing of this could be seen, they gave the column a fake base of brick and stucco at ground level at the bottom and a covering of stucco all the way to the top. They mixed marble powder into the stucco, so that the (clad) new column appeared to be made entirely of stone.

Stefan Zink warns that this is just a joke. After all, the fake column demanded quite a bit of craftsmanship from the builders, as well as technical knowledge about the peculiarities of the different materials.

He concludes: even if the circumstances in the times of the ancient Romans were different than today, the example of Temple A shows that sustainability can be successful in construction.