Project “Fusion“ of the Fondazione Arkad in Seravezza: 5 artists from the West and 5 from Hong Kong exchange their works in marble and in wood, respectively, so that the partner may add something with his material 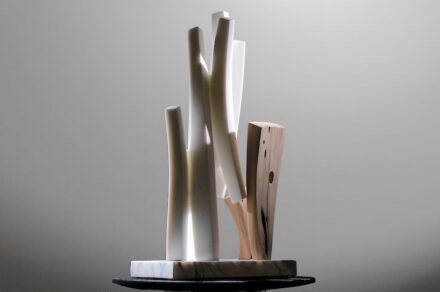 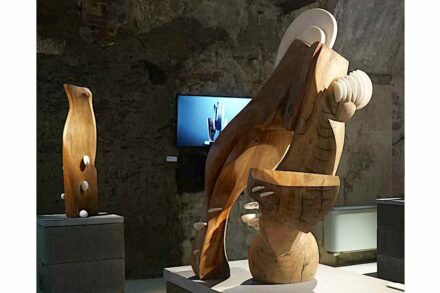 “Fusion“ is the inconspicuous title of an art project between 2 cultures that is quite sensational: 5 international stone sculptors from the West based in Italy and 5 wood sculptors from Hong Kong have exchanged one of their works. A counterpart on the other side of the world adds something to each creation with his material. Organizers are the Fondazione Arkad from Seravezza not far from Carrara and the Hong Kong Visual Arts Centre (vA!).

The results can be seen until February 12 in Seravezza and permanently on the Internet on videos.

The initiators are the stone sculptors Nicolas Bertoux and Cynthia Saw. He is of French origin and now active in a former marble factory in Seravezza. She was born in Hong Kong and is with him the founder of the Fondazione Arkad.

The idea behind “Fusion“ is to bring together two very different materials, the white marble from the Apuan Alps with the wood for which the former British Crown Colony was famous. Beyond that, it’s also about “combining skills and points of view,“ as said on Fondazione’s webpage.

The background is the Italy-China Year of Culture and Tourism, which will take place in 2022. Then the finished works are to be shown at various locations.

One of the challenges was to organize such an extraordinary kind of modern cooperation. After the works were presented to the public in July 2021, they were sent to thee counterparts. Until the beginning of December, the partners had time to add their respective ideas.

The exhibition at the Fondazione Arkad in Seravezza at the entrance to the Marble Mountains will be on display until February 12, 2022. You can get an impression of the other works on the videos linked below.

In the following video, one of the artists summarizes the projects‘ many aspects from her point of view: “I am not jealous of my work so I am happy to have someone modify it… Maybe I did not leave enough room to make a difference for another artist to act on it… I am afraid that I will ruin a good piece of art already finished by another artist… It is a gam and I like to participate.“

Co-organizers of the project are the Municipality of Seravezza and the Italian Cultural Institute of Hong Kong and Macau. Support came from the Consulate General of Italy in Hong Kong, the Tuscany Region, the Terre Medicee Foundation, the Provinces of Lucca and Massa Carrara, and numerous other public and private entities. 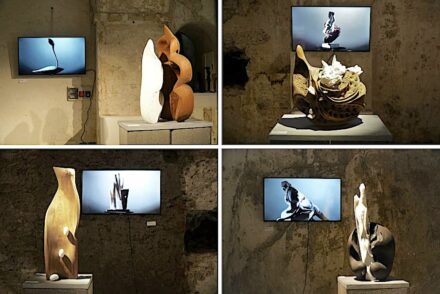 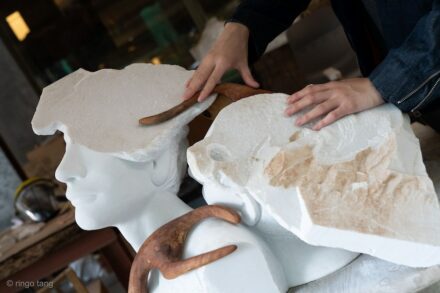 Arkad is a non-profit Foundation born in 2002 from the vision of the artists Cynthia Sah and Nicolas Bertoux, with the aim of creating an intercultural center to encourage artistic projects, help sculptors in the realization of works of art, promote and disseminate culture, particularly the plastic arts, and organize professional training and hosting of artists.

The Hong Kong Visual Arts Centre – vA! – is an open, multi-directional art space that focuses on artistic learning, research and exchange. Located in Hong Kong Park, vA! is housed in a historic building, originally called Cassels Block, built around 1900 as matrimonial accommodation for British army officers. Its short title vA! expresses the excitement and surprise that art can bring.