Looking back at Marmomac 2021 with “In our time”, curated by Raffaello Galiotto and Vincenzo Pavan: contemporary nature and timeless spirit in stone design for furniture products 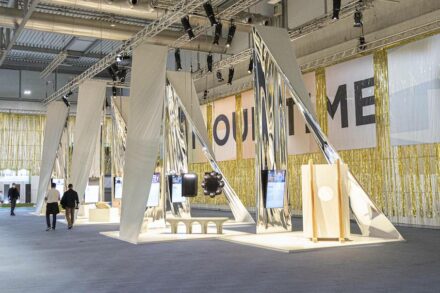 Every year, Marmomac has the Italian Stone Theatre, normally in Hall 1 on the fairground, in 2021 in halls 11 and 12. It aims to give a floor to the excellence of the country’s natural stone sector by showing examples for innovation, creativity and technical know-how. This year, the overall topic was “Time in Stone“. Here: “In our time“. We publish the fair’s press release: 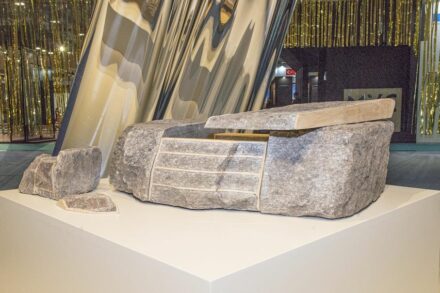 Stone Boxes. Design: Andrea Branzi. Production: Odone Angelo. Material: Pietra Di Luserna.
In Stone Boxes, I tried to cut the stones as if they were butter, i.e. by opening them up to see what was hidden inside. Such ancient hard stone can become a secret hidden from time. 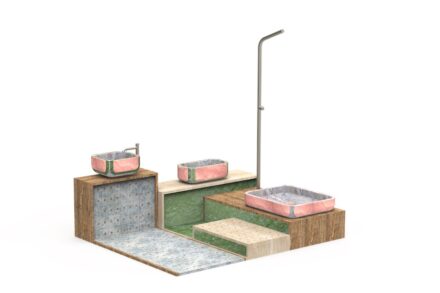 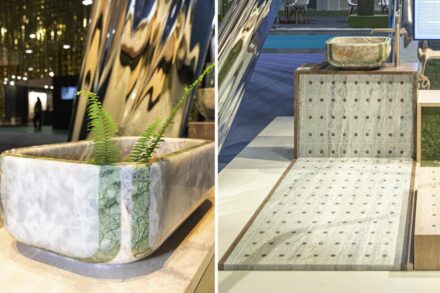 Repère. Design: Cristina Celestino. Production: Margraf With Cristina Rubinetterie. Material: Travertino, Azul Calcite, Verde Giada, Fior Di Pesco Carnico, Onice Rosa.
“The project I conceived for the ‘In Our Time’ exhibition, designed in collaboration with Margraf, lies in a hybrid interior-exterior space, for self-care, a place to take your time and experiencing direct contact with stones and water.“
If the lithic material brings time into its dimension, the project becomes representative of the time of doing, the time needed to work a precious material, with its infinite facets. A sort of small stone garden with steps, with a combination of travertine, Azul calcite and jade green, a game of colors and finishes that reminds us of Scarpa’s spaces. Functional objects, such as sculptures, are placed on the steps: a sink, a planter and a shower tray. The volumes arise from the combination of layers of different marbles, Carnian peach blossom, jade green and pink onyx, processed as a single block of material, which brings to light the different layers it is composed of, in the concavity of the object. A texture designed through marble studs placed on slight concavities of the marble slab generates a motif that draws on Canova’s technique of duplicating casts through a grid of small nails. A contemporary concept, achieved thanks to advanced processing techniques and the centennial experience of Margraf, who wants to recount the story of marble and its potential. 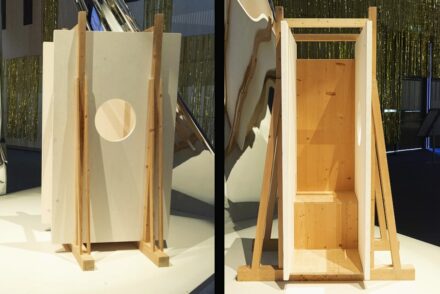 Il trono. Design: Francesco Faccin. Production: Bianco Cave By Fato Stone. Material: Pietra Di Ostuni.
Simple architectural design, an observatory, and a throne for the weary quarry worker. First and foremost, this object is a place that speaks a language familiar to those who work in quarries: a simple wooden structure that acts as bracing, and two stone slabs. I can imagine this structure blending in with blocks and slabs and waiting to be transformed. It cannot be considered a monument or an installation, but a space, a refuge dedicated to those who work stone with perseverance and passion. Stone is unquestionably the first material that has protected and sheltered us since the dawn of time. 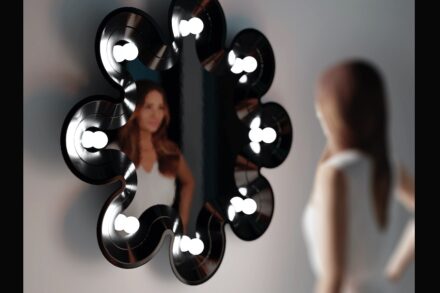 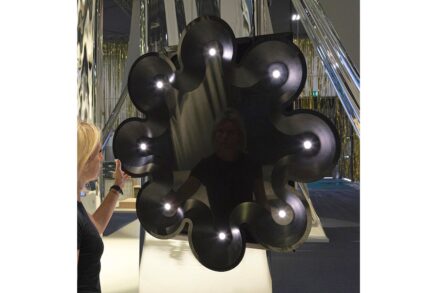 Mirror of Time. Design: Raffaello Galiotto. Production: Vicentina Marmi, Donatoni Macchine With All-Led. Material: Nero Del Belgio.
Finely polished Belgian Black marble is used in this project to develop the mirror theme. Four stone mirrors explore the concept of time by associating the ephemeral, reflected image of the observer with the eternity of reflecting stone. A temporal association is created between stone and people to evoke an intriguing reflection between the oldest natural material and the transience of man who uses it. The designs of the four different mirrors have been created to minimize waste. They have been produced using two different machining operations, CNC milling and cutting. 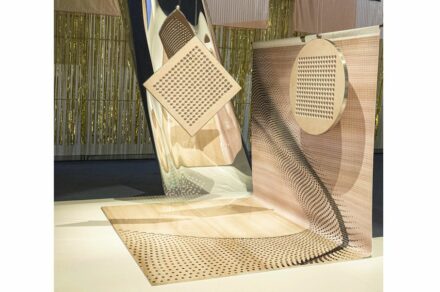 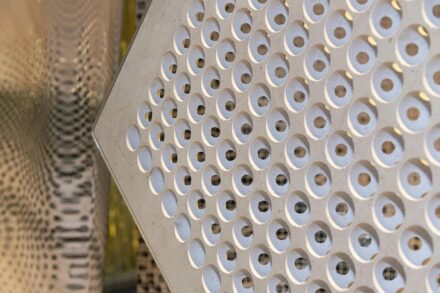 Virtual lithic screens. Design: Giuseppe Fallacara, Maurizio Barberio – New Fundamentals Research Group. Production: Stilmarmo With Cnc Design, Piccinini Marmi, Mosaico Digitale. Material: Uv Printed Apricena Limestone And Natural Resin.
The installation aims to make the natural pattern of the stone interact with a parametric pattern imprinted on the stone surface using UV printing, to create a multiple and virtual reading between natural and artificial. Two hanging “medallions“, one circular and the other rhomboidal, exemplify the two-sided excavation process, allowing the stone to become a filtering screen between inside and outside, whose shadows are projected and mixed with the parametric pattern printed on the stone. 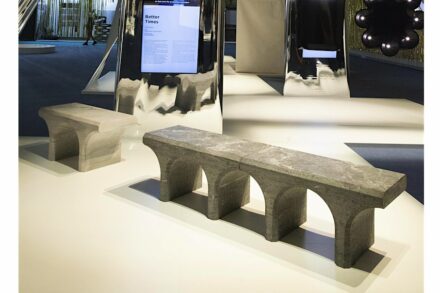 Better Times. Design: Matteo Ragni. Production: Gmm, Alphacam By Licom Systems. Material: Palissandro By Tosco Marmi.
A series of seats positioned as solitary islands and spaced from each other by their own width of one meter. In a hopefully very near future the empty spaces can be filled with new modules that will create an imaginary bridge on which to stop and share pleasant moments of conviviality in the open air. The marble used is a Rosewood, native of Val d’Ossola, valuable for its imperfections in which the traces of oxidized iron create a unique material effect of great character. The passages of the milling cutter inside the arches have left, during the numerical control processing, some slight traces in embossment that underline the honesty of the production process, creating in fact a decoration expression of the technique that enhances the surface and makes the artefact almost unfinished. Atmospheric agents and time will complete the work, smoothing the surface over the years.