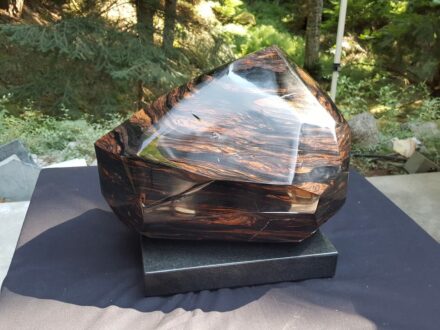 He creates mostly simple forms, so that the structures and colors of the material are shown to full advantage

Michael was originally a geoscientist by background. His enthusiasm for science is still great, and so on the web page of sculptor Michael Yeaman you can find brief information on the geology or petrology of those stones that he has chosen for his sculptures. This information, for some visitors is merely background information, but it is brought to full stage light by the artworks.

As an artist, he actually tends to take a step back from the geologic complexity of his work; the forms he gives his works are usually simple.

He is mainly concerned with the colors and structures in the stones, which have often been described as paintings of nature.

Which in turn means that Michael Yeaman’s art pieces demand hard physical work from him. Such varieties are, in most cases, hard to very hard. 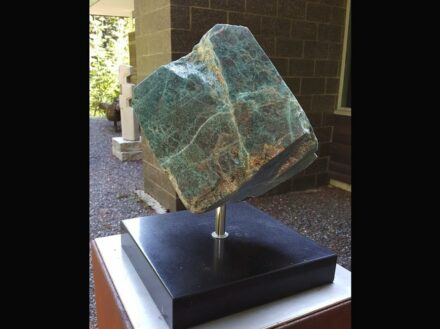 Accordingly, he resorts to electric or air tools, and only rarely uses hammer and chisel.

Nevertheless, the manual work on the stone remains an important part of his creations, because only the applied force explains the material to him, as he puts it: “By the time I finish polishing my sculptures, I understand a great deal about their creation and evolution.“ 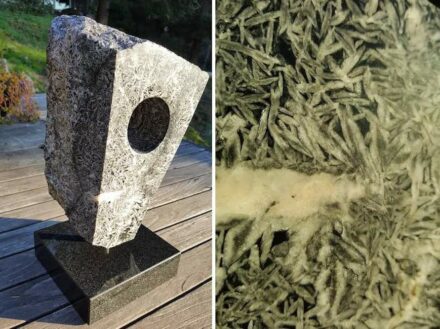 Geologists can talk for hours about how crystal lattices, minerals and, to that extent, the stones themselves change when conditions such as pressure or heat change at different depths in the Earth’s mantle.

“I was interested in science from an early age,“ Michael Yeaman writes in an email. He comes from a humble background and was the first from the family to be sent to college. 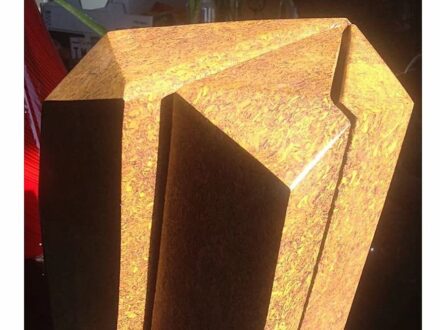 That college was the renowned Stanford University, where he was interested in astrophysics, but then switched to geophysics because there was “a much broader set of subjects (physics, geology, paleontology, chemistry, etc.) and to have good career opportunities,” as he writes.

For most of his professional life, he was a scientist and executive in an international energy company. 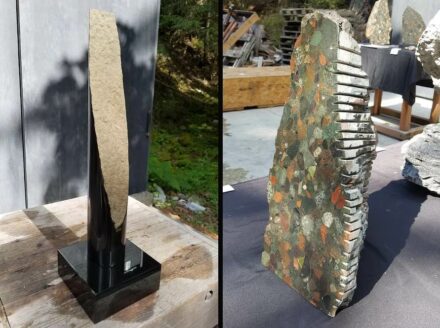 What brought him to art, we had to ask.

To which he countered, “I never shifted from science to art, rather that I added/developed an increasing appreciation of art/design as I became older.“ And he adds, “I remain quite interested in geology and offer geology field trips for local charities.“ 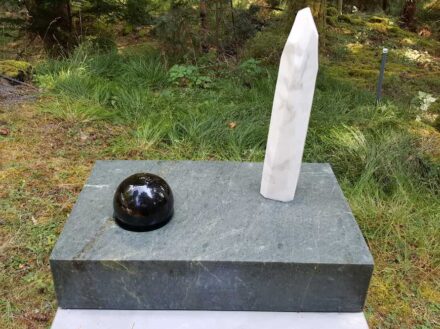 He said he became heavily involved in sculpture, architecture and design during his working years and in 2005 began working with stone and the tools used by sculptors. The Northwest Stone Sculptors Association (NWSSA) classes and symposiums played an important role in that, he says.

He has since completed about eighty-five works and sold about two-thirds of them.

Some of these have been forays into the world of product design, such as the alabaster table lamp (“Cored alabaster tube with LED“) he created for the UN’s International Year of Light in 2015.

Initially, he also liked to bring together several types of stone into one work. For example, in “Space, Matter and Time“, his commentary on Isaac Asimov’s science fiction. 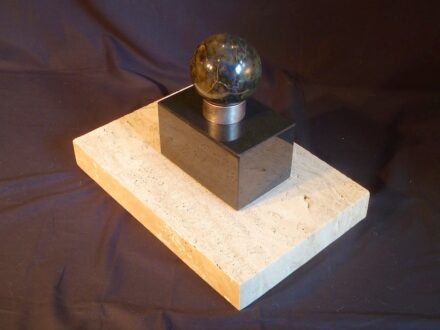 Or “Alternate Design for Lenin’s Tomb“ as a reply on Russian Constructivism.

Today, however, he tends to leave it at one stone variety per work, which then, however, as said above, owns the respective stage all by itself.

And why is he seen in some photos wearing a Scottish kilt?

Yeaman is indeed a Scottish name, he answers, but in his family not he, but his wife has the Highland family background. “But I love Scotland so I still get to wear the kilt,“ we hear him smile at himself as he sits at the keyboard. 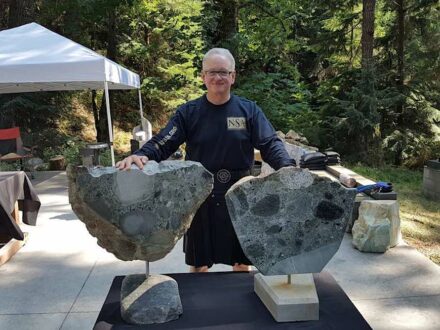