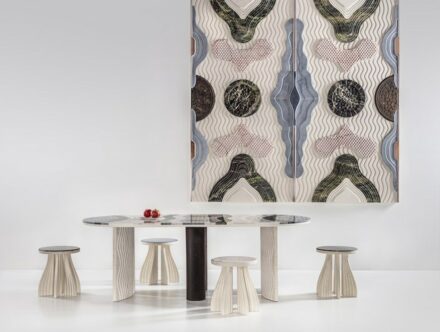 Lithea is a natural stone design company based on the island of Sicily, whose design ideas always have a reference to the Mediterranean. The collections of recent years have mostly been about inspiration based on ancient craft techniques developed around the sea between Europe and Africa, such as wickerwork, fabrics, or ceramics.

In the current collection “Pensieri Panteschi“ (Thoughts from Pantelleria), designer Elena Salmistraro takes abstraction one step further: she has taken the island of Pantelleria as her model and plays with striking elements found there.

It is mainly wave forms that she depicts on the top of the large table and in the wall panels (120 x 60 x 3 cm). In them, one can easily recognize the sea around the small island about 100 km south of Sicily and 60 km off the African coast. 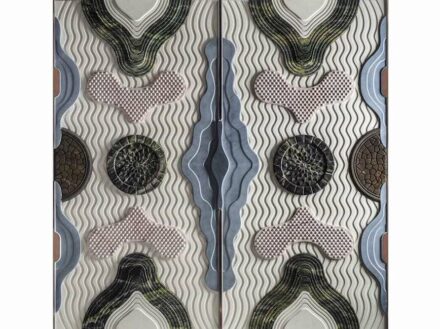 But: Elena Salmistraro has cut the waveforms out of natural stone – which brings Pantelleria itself and also the geology there into view. The island lies on the rift zone, where the European and African continental plates collide.

Volcanism goes hand in hand with this – the last time there was an underground eruption was in 1831, when a new islet rose out of the water. Since then, however, it has been eroded again by waves and storms.

On Pantelleria, which does not exceed 14 km in length and 8 km in width at any point, people live and there is evidence of ancient cultures. Famous are the Dammusso, round stone walls with a dome as a roof above. They can be found in Elena Salmistraro’s work as circles in the wall elements and also in the seats of the stools. In the original they served as collecting basins for rainwater.

Another striking detail of the island is represented by the circles: they are those half-height dry-stone walls that protect the gardens from the persistent wind. 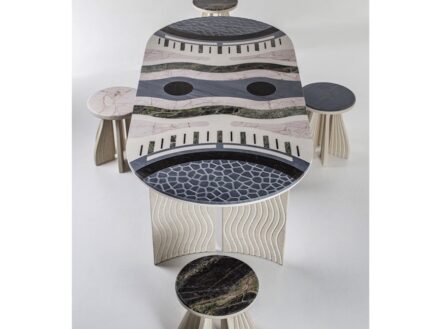 For the dining table (220 x 100 x h 73 cm) Elena Salmistraro was inspired by the Speccio di Venere (Mirror of Venus). It is a lake on the island fed by hot springs. If you want, you can see in the lines rising columns of hot rock.

In the past, obsidian was an important commodity on the island: the glassy jet-black rock is formed when lava is abruptly cooled in seawater. When it is split, the edges are razor sharp (but also break easily).

The collection also includes vases and a centerpiece, of which we have no photos. 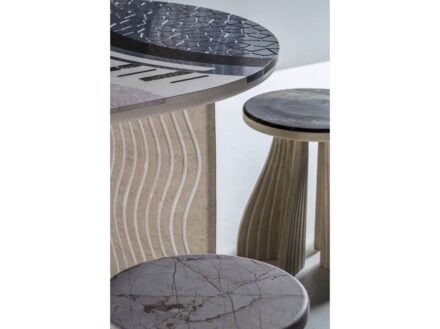 Lithea’s collections should not be misunderstood as product design. They are examples of “Functional Sculptures,” where the artistic design is in the foreground and yet objects are created that want to be more than decoration.

Elena Salmistraro soberly defines the concept on her webpage: “My creations are the result of a combination of art and design.“ Lithea puts it poetically: “Today’s wise hands firmly tightened to those of the fathers from whom they learned the movements, the control, the rhythm of the gesture, shape the material.“