Rock art (petroglyphs) in the Great Basin in the western USA have been carved into the stone for 12,000 years and continuously renewed 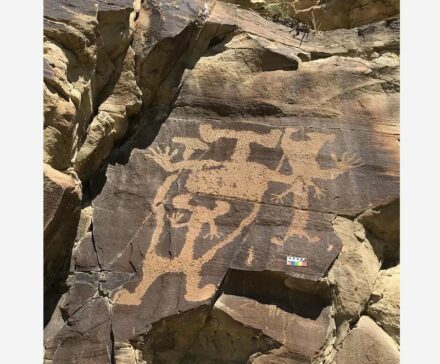 Petroglyphs, human-like creatures, fantastic animal figures or geometric patterns engraved in stone are difficult to date. This means that it is also difficult to interpret them, because the creating cultures are often not known. Researchers at the Max Planck Institute for Chemistry in Mainz, Germany, have now applied a non-destructive method based on the analysis of the uppermost, dilated rock layer to petroglyphs in the Great Basins in the western United States. The findings: the artworks were produced for 12,000 years and continuously renewed; in the process, people repeatedly reverted to the same representations but endowed them with new meanings.

The scientists focused on rock art at four sites in Idaho, Wyoming, and southern Montana in the northeastern part of the Great Basin, where the Shoshones’ cultural area is to be found. The diverse rock art spans a broad time period, from the Paleo-Indian era about 15,000 years ago to the recent past.

The team determined the mass per area, or areal density, of manganese and iron on the rock surface. Both elements are part of the crust called “rock varnish“, which was deposited on stone as a thin, dark coating. After being carved, this layer forms again and grows over the years.

“We compared intact rock varnish with the varnish of the engravings and were thus able to classify them chronologically,“ explains Meinrat O. Andreae, professor emeritus at the Max Planck Institute for Chemistry. Together with his wife, biogeoscientist Tracey W. Andreae, he conducted a total of 461 measurements directly on site using a portable X-ray fluorescence device.

It was particularly important that these investigations were non-destructive, i.e. that the rock varnish was not attacked. 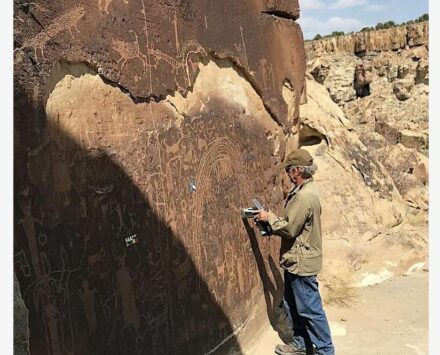 The researchers gained certainty about the correct dating by determining at which rate manganese was deposited in the rock varnish over the millennia.

“All of our analyses suggest that the earliest petroglyphs were created as early as the transition period from the Pleistocene to the Holocene, about 12,000 years ago, and were repeatedly revised by indigenous people over thousands of years until the recent past,“ explains Meinrat Andreae, a biogeochemist.

At Celebration Park alone, one of the Idaho sites, rock engravings cover a span of about 10,000 years. The earliest images there were abstract forms. Later, representational images were added. At other sites, again, representational figures dominated first and abstract patterns followed later.

Overall, the scientists found a broad spectrum of styles and motifs at the sites, ranging from line drawings of abstract geometric patterns to large, human-like creatures known as anthropomorphism.

The researchers are already planning further expeditions to Saudi Arabia, where there are also numerous well-preserved petroglyphs.