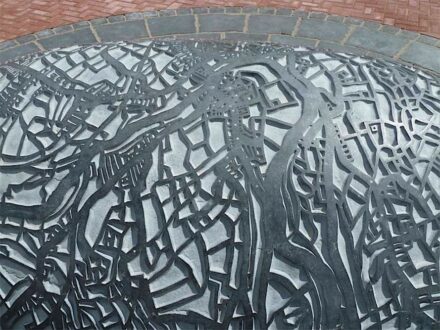 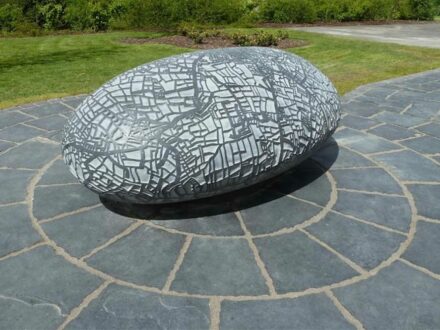 They are hidden images, equally fascinating for children and adults. Irish sculptor Michelle Byrne transfers city maps, aerial maps or contour lines onto large stones. Inevitably, viewers of the massive chunks then search for structures they know, such as paths, intersections, squares, or fields, and evidently find great pleasure in seeing the world in a completely different way for once and reassembling the image of it.

One such map work by Michelle Byrne is the “Derdimus Tower“ placed on the outskirts of the town of Kilkenny, which is known for its dark limestone (Kilkenny Blue). It is a 4 m high column that tapers from 65 cm in diameter to 45 cm from the bottom to the top. 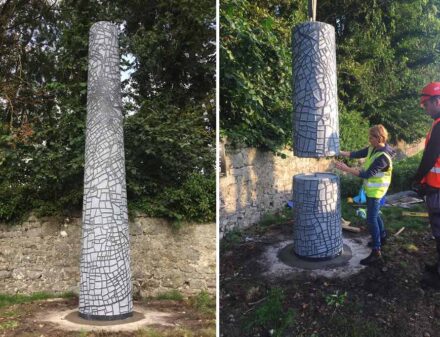 Engraved in it is the 1830 Ordnance Survey, drawn up at that time and still recognizable today in the streets. The work was financed as part of Per Cent for Art. 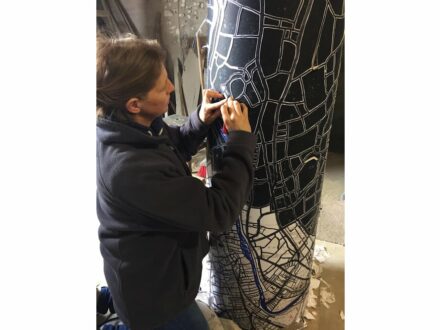 Transferring such a two-dimensional structure to a round body requires a lot of know-how. Let’s fast-forward through the steps: first the surface of the stone is polished, then it is covered with masking rubber, on which the map of the city is painted, then the spaces between the streets are cut out and sandblasted to a depth of 5 to 10 mm, finally the masking is removed, and the final polish is applied to the street grid.

In this form of sculpting, there is a lot of paperwork before working on the stone, so to say.

Another example is “Journey,“ a commission from St. Mary’s National School in Thomastown. This is a virgin block of 5 tons. After six months of work, the artist had reduced it by 2 t, given it the intended egg shape and imprinted on it the plan of the school’s surroundings.

For children there were two attractions: A small stainless steel disc was set into the stone indicating the homes and starting point of the children and each child was given a 10 x 10 cm cut-out from the template to color. Michelle Byrne assembled these individual pieces into a new overall map, which today hangs in the school’s foyer. 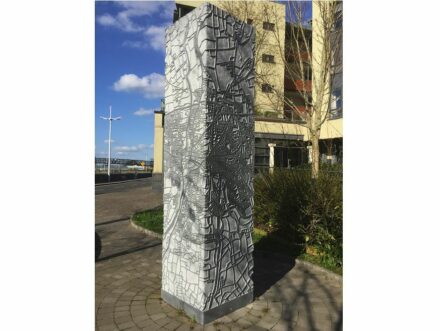 As meticulous as she is about transcribing, she seems to have a passion for accurate facts from the past. “I am drawn to undertake in-depth environmental or historical research,“ she confirms on her webpage. “What interests me as an artist are these layers of patterns and marks, we have left on the landscape, what they tell us.“ 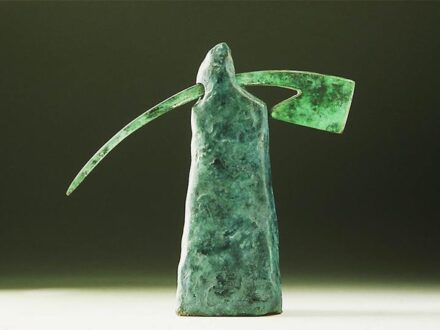 Since graduating from GMIT College of Art and Design in Galway, the Dublin native has worked as an artist. Initially, she also used metals, plaster or found objects. More recently, her focus has been on Blue Kilkenny Limestone. “It gives me the black gray contrast I like,“ she says, referring to the color differences as a result of processing.

Currently, she is also experimenting with resin-inlays in natural stone.

She has to handle large dimensions in her work. In order to taper the Derdimus Tower over the entire 4 m to the top, the entire piece had to be turned on the lathe at McKeon Stone company. Then it was sawed into 3 pieces, where a map was transferred to the surface and the pieces finally assembled on site with help of a crane. 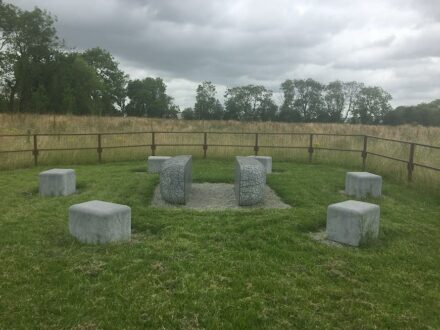 She is effusive in her praise of the company and its boss, Niall Kavanagh, who almost raised it to a little Carrara for his Blue Limestone in the Stradbally workshop: “Niall and McKeon have been invaluable with all the large sculptures, allowing myself and so many sculptors to work in the yard availing of both their expertise and advice.“ She was also able to use the company’s tools and equipment, she further praises, “Without McKeon my work would not be possible, they truly are champions of the arts.“ 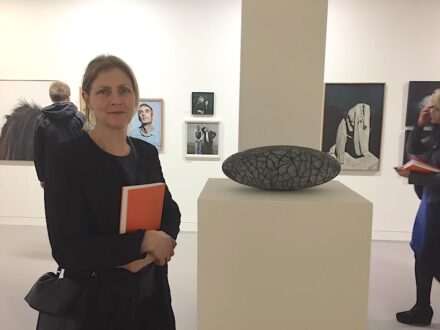