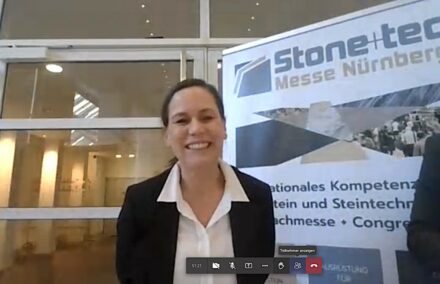 The natural stone show in Nuremberg, Germany, plans to have a profile as a “competence center for the stone sector“ based on new ideas and innovations

Simone Krog is the new project manager of Stone+tec 2022 (June 22-25, 2022). She showed up briefly online or live in front of the cameras at a press conference. “She has a heart for natural stone“ is how she was briefly introduced.

The press conference focused on the concept of AFAG Messen und Ausstellungen GmbH as the new organizer. It was also about the state of the art concerning exhibitor numbers.

Henning Könicke, AFAG Managing Director, highlighted 2 novelties: for the first time, there will be a congress as part of the supporting program, and the fair wants to become more international again. Könicke expects a “large Italian joint presentation“. He is in talks with associations from Turkey and Brazil, among others.

As far as the number of exhibitors is concerned, he is hoping for 250. At the moment, he said, the numbers are the same as at the previous fairs (without Covid-19). A boost in bookings is expected when the end of the epidemic emergency – announced by the German government for mid-March – will officially be declared.

Halls 9, 10 and 11 are currently planned for the 3 major focal points of this Stone+tec being technology, stones and gravestones. Hall 12 has already been considered as an extension.

With the congress, AFAG wants this edition of the trade show to be more recognized as a “competence center.“ It is planned that Architects can obtain training points through attending lectures. In addition, interior design will be presented as a new topic of the event.

The highlight in the field of architecture will be the presentation of the German Natural Stone Award. The stonemasons’ association BIV plans to present its new promotion concept for vocational training (“Ausbildung“).

The congress section on gravestones will focus on the question in how far cemeteries can contribute to community development. Trend researcher Matthias Horx will be one of the speakers.

Another novelty is the “Innovation Area“ at the fair‘s Entrance West, where innovations will not only be exhibited but also demonstrated.

At the press conference, various company representatives emphasized the importance they give to Stone+tec as such and to in-person trade fairs in general. Only by personal meetings and discussion of ideas the sector can move ahead, they said: exchanging information about the customers‘ demands helps to find better services and products.

Hermann Graser, Chairman of the Natural Stone Association (DNV), appealed to the local quarry companies to seize the opportunity: “The demand for regional materials is very much increasing,“ he analyzed the economic prospects, so the companies should use the fair to present themselves and their stones to the public.