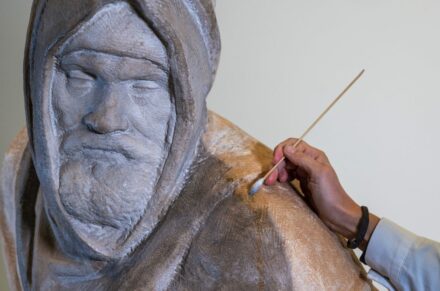 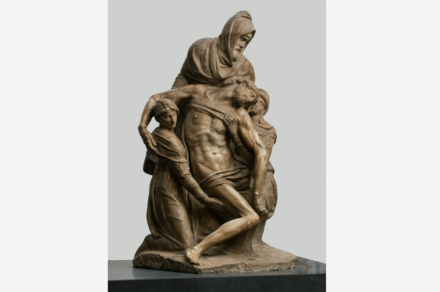 The 2.7-ton block from the Seravezza quarries had microcracks and “impurities“ so that even the chisels “sparked“

In Florence, at the Museo dell’ Opera del Duomo, the restoration of Michelangelo’s masterpiece Pietà Bandini has been completed. Until March 31, 2022, the sculpture with 4 figures, one of which shows the face of the over 70-year-old master, can be seen from a platform from which specialists had been working since November 2019, with interruptions due to the Covid-19 pandemic. In parallel with the cleaning, the white marble sculpture was subjected for the first time to a detailed material analysis, which revealed some surprises.

The restoration was financed by the non-profit U.S. society Friends of Florence, under the overall supervision of the Soprintendenza ABAP, representing the city and the province.

Michelangelo had worked on the block, which is 2.25 m high and weighs 2.7 t, between 1547 and 1555. It is known that he designed it for his own tomb in a Roman church and that he found time for it only at night or on days off. Because he earned his money from 1547 on at St. Peter’s Basilica, where he had taken over the construction management.

However: he never finished this Pietà (one of a total of 3), even though other works followed.

The exact analysis showed now that actually the material was the cause for the premature end at the Pietà works.

This confirmed the statements in Giorgio Vasari’s writing of 1550 (English title: “Lives of the Most Excellent Painters, Sculptors, and Architects“). The later biographer of Michelangelo had reported that the block of marble was “hard“ and “full of impurities“ and that the chisel “sparked.“

In the case of the sparks, they were inclusions of pyrite, the investigation now revealed.

The analysis also identified numerous microcracks in the sculpture.

It was probably while working on the left arm of Christ and the arm of Mary that Michelangelo resigned and gave up the project. 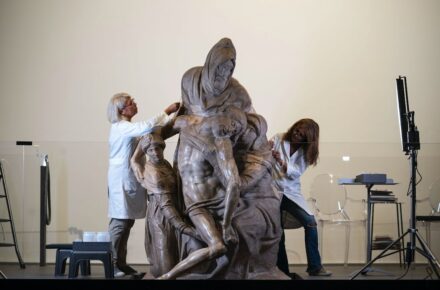 On the other hand, it has not been confirmed that in anger he wanted to destroy the unfinished work with a hammer. However: around 1565, a year after Michelangelo’s death, his collaborator Tiberio Calcagni once again lent a hand and brought the work to its present state – perhaps he removed the traces of the master’s wrath.

The analysis revealed a small sensation with regard to Italy’s marble economy at that time. We recall: since Caesar had been inspired in Egypt by the natural stone temples and sculptures there, and Emperor Augustus had made white marble an expression of the highest style, following the Greek model, there was an enormous boom in demand for natural stone, especially from Carrara.

The marble of the Pietà Bandini however comes from Seravezza, a few kilometers far away from Carrara, as has now been revealed.

The explanation for this has to do with economic policy: the valley of Seravezza with its – now also famous – marble quarries belonged to the Medici dominion, and their head at the time, Giovanni de’ Medici, had instructed Michelangelo to use this marble for work on the church of San Lorenzo in Florence, for example. Part of the order was also that the sculptor had to organize a practicable transport of the blocks.

Giovanni de’ Medici, by the way, was elected Pope in Rome in 1513 under the name of Leo X, and he arranged for his marble to be used there as well.

During the restoration by Beatrice Agostini and Paola Rosa, among other things, the dust deposits on the sculpture and wax residues or remnants of a plaster cast were removed. Details of the work are described in a report that we have linked below.

Now the stone can be seen again in its original color. The plasticity of the sculpture is also shown in its original state – Michelangelo masterfully knew how to express the inner feelings of the figures through the external design. Parts of the group of figures are polished, parts only roughly hewn.

Christ can be seen, who has just been taken down from the cross and whose body is held by Mary, Mary Magdalene, and Nicodemus. Nicodemus is wearing the face of Michelangelo. 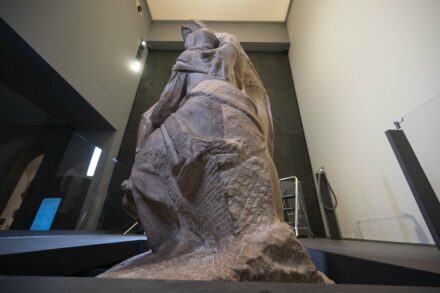 Timothy Verdon, director of the Museo dell’ Opera del Duomo in Florence interprets the design in a text: the features of the male figure are “fraught with experience and suffering.” Verdon contrasts this expression with that of the Pietà in St. Peter’s Basilica, which Michelangelo created when he was barely 25 years old. In that group of figures there are only Mary and Christ, glory and perfection are represented.

The name of the Pietà Bandini is also explained in a text of the cathedral: Tiberio Calcagni took the work again after the death of the master and then sold it to Francesco Bandini, a banker and aristocrat in Rome. The price was two hundred scudi, and Bandini had the Pietà placed in the garden of his villa. After numerous other sales, it arrived in Florence in 1674. We have linked the text for download.

Since 1981 it has been there in the Duomo Museum, since 2015 in a room entitled “Tribuna di Michelangelo.”

Opera del Duomo Museum with videos of the restoration 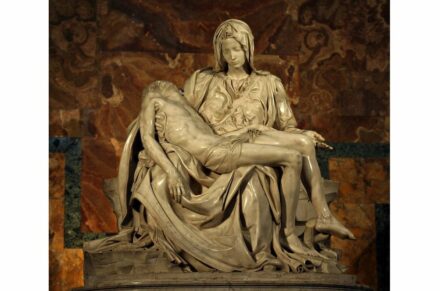