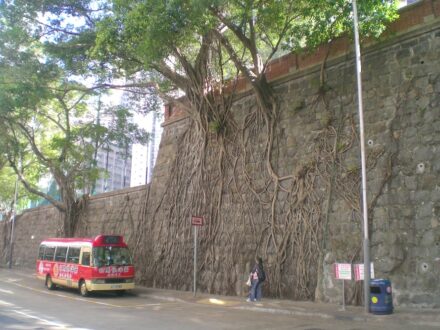 Mostly the Chinese Banyan (Ficus microcarpa), which can develop magnificently in the extreme locations in the inner city

The name seems to carry a contradiction: Stone Wall Trees exist in the subtropical metropolises of Asia, and their habitat is actually high walls of stone. They stretch their root system like a net over the ashlars and have impressive crowns. They provide habitats mainly for birds, insects, and other small animals, and in urban climates they provide shady places with tolerable temperatures.

They are best known from Hong Kong, where efforts to preserve the giants, some of which are 100 years old, have been underway for several years. But they are also known from cities in mainland China or Macau.

Their locations should not be confused with dry stone walls, which consist of only stacked stone chunks without any mortar at all. Here we are dealing with precisely shaped stone blocks, in the joints cement serves as an adhesive.

The fact that trees can grow on them is a play of nature with a certain pioneer species, Chinese Banyan (Ficus microcarpa).

On Hong Kong Island, which is actually nothing but a steep mountain cone, the British colonial government had retaining walls raised on the slopes built in 1850 to counteract the frequent landslides. The work was carried out by Chinese stonemasons.

The stones for the walls were granites or volcanic varieties, mostly 30-40 cm high and 20-60 cm long, according to the Willowherb Review web page.

The trees came with the birds, namely as seeds in their droppings. 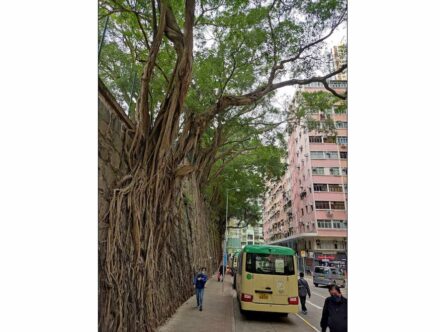 Now, the Chinese fig has a few unusual properties: it can grow entirely without soil substrate, for example, on other trees, provided that there are sufficient nutrients and moisture (by air and rain). However, it is not a parasite. It constantly sprouts aerial roots – when these reach the ground or a rock, they lignify and soon become a stable root network on the outer wall of a slope wall, for example.

Other roots grow back through the joints of the wall and fetch nutrients and water from the fills on the other side.

So, from the Chinese fig’s point of view, walls are an ideal habitat – especially since the plant survives dry spells well by storing rainwater in its aerial roots. It also copes well with city air and other stresses.

In a study in the journal “Nature“ (January 2022 ), an inventory of the species of stone wall trees was presented, this primarily for Macau, but in addition to Hong Kong also for the Chinese cities of Jingzhou, Nanjing, Zhejiang, Chongqing and for the Pearl River Delta. Numerous varieties have been identified, but with a clear preponderance, the Chinese fig has conquered this exclusive habitat.

By 2015, citizens had recognized both the ecological and cultural value of these unusual, self-propagating plants in Asia’s cities. At that time, a giant tree had fallen from a wall in Hong Kong and was lying across a two-lane road on a slope. The city government deemed other trees to be unstable and had some of them cut down.

Citizen protest arose, and subsequently scientists also turned their attention to the ecology and history of these green niches. In 2019, the American Society of Landscape Architects (ASLA) gave an honorary award to student Anson Ting Fung Wong for his webpage on the subject and for a video in which the trees are referred to as “silent members of the neighborhood.“ 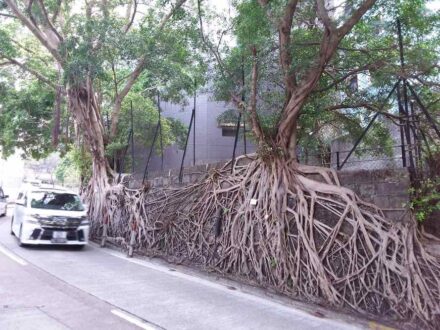 In Hong Kong, the environmental group Changchun Society is committed to the preservation of stone wall trees. Currently, the issue has a special significance because many of these plants are reaching their age of around 100 years. They need to be able to grow aerial roots in the walls so that they can become new trunks and maintain the stability of the trees.

In Macau, a Stone Wall Tree Trail System is currently being developed in the historic Old Town. It is intended to bring the citizens and also tourists closer to this natural heritage. The article in “Nature“ points out that the city government appropriately launched the “Strolling along Macao Street“ project back in 2012.

By the way: no one has ever fertilized or watered the stone wall trees.