It’s said to be 37 tons of Carrara white marble used for a very special grave at Shiregreen Cemetery in Sheffield that is now the subject of a dispute with authorities. Sure, the trouble is about the size and decoration of the monumental site commemorating Willy Collins, a bare-knuckle boxer (boxing without gloves). Better known to his fan base in the British industrial city as “Big Willy Collins“ or “King of Sheffield,“ he died unexpectedly at age 49 while on vacation in Mallorca, where he was celebrating his wife‘s birthday.

The installation is, let’s say: remarkable, without a doubt. It includes 2 man-high statues of the boxer next to a triangular pediment (tympanum) on columns with a Pietà in front of it, angels and a sofa made of stone, and as an acoustic diversion, a solar-powered jukebox that plays Willy’s favorite songs.

LED lights illuminate the whole thing at night, and there’s round-the-clock security to keep vandals away. Four flagpoles with Irish flags rise into the sky above the site, because Willy came from Ireland with his parents and later started a family himself in Sheffield. There is talk of 9 children, and occasionally numerous grandchildren are listed by the press.

The funeral was in August 2022, with 30 horses pulling a carriage with the gilded coffin.

In the meantime, numerous visitors from all over the United Kingdom have come to Sheffield to have a look.

Now the city administration has intervened. It points out that especially graves with such dimensions require a permit. Willy‘s bereaved claim they have submitted the documents but heard nothing from the authorities.

A press report has already poured oil on the fire and reported that Willy’s wife was not amused and had announced trouble. 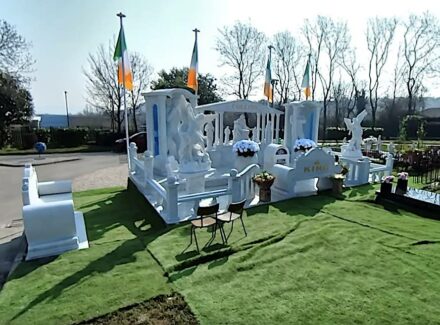