A sensitive, even tender bust depicting a young woman on the cusp of maturity, is new in the collections of the J. Paul Getty Museum 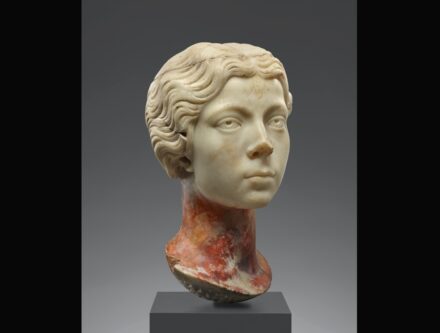 New is also a stone portrait which likely represents a Greek poet, priestess, or benefactor

The J. Paul Getty Museum has sent us information about two exceptional marble heads of young Roman women which have been added to its collections:

“The two heads of young women are outstanding examples of Roman portraits from the Imperial period. Both are well-preserved and will meaningfully enhance the Getty Villa’s displays of Roman sculpture,” says Robert Tuttle Director, The J. Paul Getty Museum in Los Angeles.

The bust, called Portrait Head of a Young Woman, dates from AD 170–190. The portrait is exquisitely carved and a striking rendition of a young woman on the cusp of maturity. Holding her head high on a long and slender neck, the head was intended to be inserted into a separate body of a full-length statue.

Based on the extraordinary quality of the head, its unknown artist appears to be one of the best portrait sculptors of their generation, and indeed of the Roman Imperial period. Whereas other female portraits dazzle with their elaborate hairstyles, here the skill and sophistication of the artist are focused on the face itself, and its subtle features come together to form a sensitive, even tender depiction of a young woman. The unresolved expression, which seems to oscillate between alertness, reservation, pride, and anticipation, makes the sculpture particularly arresting. This ambiguity is one of the subtle characteristics that make this portrait such an observant and compelling study of a young woman.

The addition of this exceptionally fine portrait of a young woman not only adds a new highlight to our antiquities galleries, but also elevates the quality and importance of the Roman collection as a whole.
The head was first documented in 1937 in the collection of Tommaso Bertelé (1892–1971) in Rome; he owned it until the 1950s, after which it appeared on the open market in 1993, when it was purchased by the New York collector Lewis M. Dubroff. 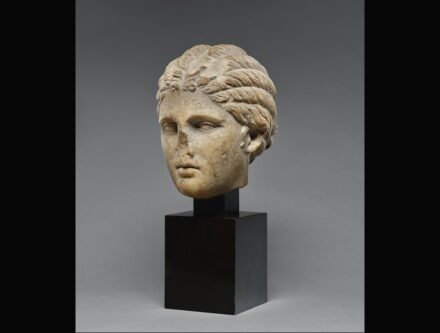 The other marble portrait, made between 25 BC and AD 25, depicts a young woman with symmetrical features and a melon coiffure hairstyle. It is among the finest preserved examples of a type of idealized head known as the Small Herculaneum Woman that originated in the early Hellenistic period (around 300 BC). She likely was intended to represent a Greek poet, priestess, or benefactor.

The statue type is named after two draped statues that were discovered at Herculaneum about 1711 (now in the Dresden State Art Museums). The sculptures were among the first discoveries from the ancient city. The Small Herculaneum Woman was one of the most popular statue types for the bodies of female portraits in the Roman Imperial period; close to 200 examples have been identified, ranging from the 2nd century BC to the 3rd century AD. The vast majority of these Roman statues were fitted with individualized women portraits. In an early Imperial Roman context, it would have been a public portrait of a woman honored for her role in society or as the family member of a prominent figure. The Getty head, however, is one of only seven versions that replicate the idealized head of the original Greek sculpture.

Several sculptures in the Villa’s collection are closely related to the Small Herculaneum Woman head, including one of J. Paul Getty’s favorites, the head of a young woman from a late 4th-century BC Attic grave relief. Both are of similar age and share the same melon hairstyle. Another example includes the Portrait Statue of a Woman of the Hadrianic period, which has a portrait head inserted in a body of the Small Herculaneum Woman type.

The Small Herculaneum Woman head was first recorded with the dealer Marcel Heim in Paris in 1952, when it sold to the noted collector Georges Renand (1879–1968); it remained with his heirs until it was sold at a Paris auction in 2018.

The Roman heads of women will be on view at Getty Villa Museum starting in Spring 2022.