In the Danish city of Billund, there is a playground called “Play Contract“, where children and adults are supposed to come together around objects made of pink marble 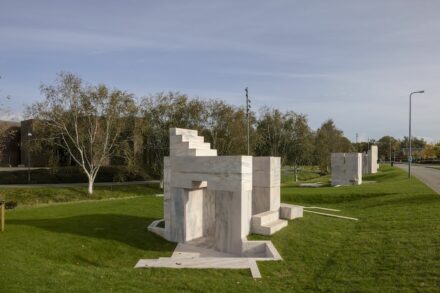 Can natural stone be a material for playgrounds, when it is very hard one can really hurt oneself on its edges? In the city of Billund in Denmark there is a playground with 5 objects made of pink marble, where this question is dealt with from a very unusual perspective. The sponsor for the objects was the Kirkbi holding company, which is backed by the Kirk Kristiansen family and the global LEGO corporation.

The project was launched in 2021, the 10th anniversary of the Capital of Children, as Billund likes to call itself.

“Play Contract“ is the motto of the playground. It consists of 5 objects made of pink marble, which can be seen as things for climbing or playing hide and seek, or just as abstract sculptures. They are glued together or assembled from a total of almost 300 individual ashlars. 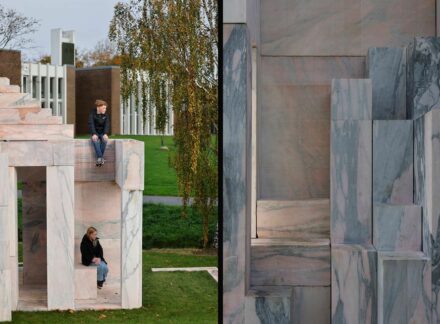 You can balance on these objects, hide in narrow niches, deposit objects in these very niches or shout something to the other players through narrow openings.

Hmm. And what if a child falls down while romping and hits a ledge while falling? 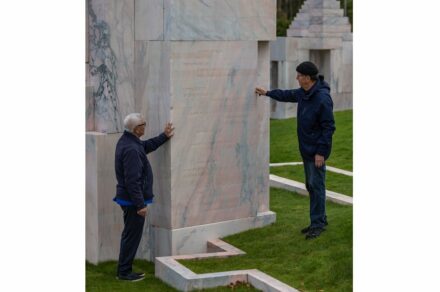 But maybe it’s not about a playground for children at all. Because the title “Play Contract“ refers to that contract engraved on one of the objects that defines, so to speak, the rules of procedure of the facility: the adults must submit to the children, here: “embrace their sense of the absurd and to abide by children’s sense of time.“

Aha, learning from the children, which is “power to the children“ and the like have been read and heard many times in literature and in hit songs.

But what does that mean in practice, in relation to the Billund facility: Should the adults now climb around on the objects, so that they might slip and break their bones? 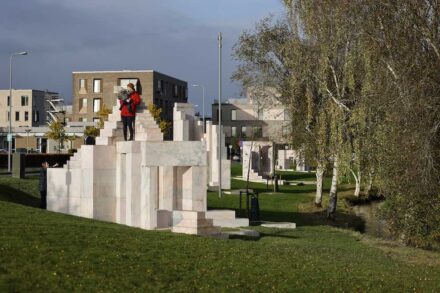 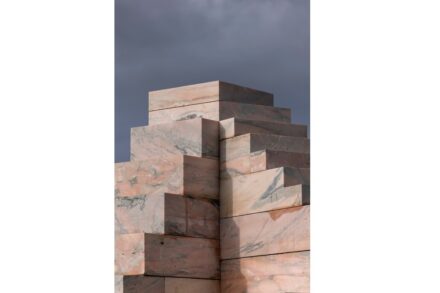 The designers of the studio Superflex, who like to produce unusual ideas in their creations, give a hint of the direction they are thinking in their concise description for “Play Contract”: “Adults strive to control the world around them, but play involves allowing for surprises and giving up control. Play Contract is an invitation for children and grown-ups to meet and re-think the idea of play.“

This sounds like play as a way to make the world a better place, a train of thought familiar from the 1980s. However, the focus seems to be different this time, if we have understood the idea correctly: it is about playing together between children and adults.

What is more, perhaps it’s also about fusing the future together, which these days, as we all know, is shaped by adults alone, even if they will not have to live in it.

The project “Play Contract“ went as follows: 121 children from Billund were asked to design ideas and objects that could enable different generations to play together. Together with KWY.studio, a platform for ideas for cooperation, the desired activities were derived from this, i.e., climbing, sliding, jumping, or sitting and more.

The designers implemented these proposals in the five objects and in extensions on the meadow around them.

Thus, at this point, we as reporters can finally abandon the horrible concept of “objects“. In reality, the 5 sculptures are climbing trees, which can also be slides, swings or benches and tables – in short: toys.

Finally: why was pink marble from Portugal used?

Answer: In the design phase, the children had used pink Lego bricks to implement ideas for the desired toys. And: pink marble “creates a feeling of timelessness,“ according to a press report.