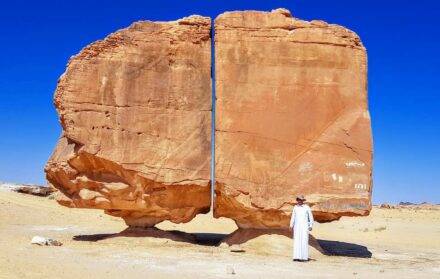 The “Al-Naslaa” rock located 50 km south of the Tayma oasis in Saudi Arabia looks like it’s been cut with diamond wire or waterjet and perfectly balanced on tiny pedestals. It is 6 m high and 9 m wide and covered with numerous petroglyphs on one side. Maybe the cut is the result of wind and rain along a fault.

National Geographic magazine has a report about the caves in Kosovo, which are accessible to tourists.

Walker Zanger, one of America’s luxury brands in tile and slabs, has launched a new website.

A prehistoric engraving of a hunting scene on a black rock has been discovered in the Eastern Egyptian desert.

“Bernini and His World“ is a new book about the famous sculptor and the 17th century. The author is Livio Pestilli, professor emeritus and former director of Trinity College, Rome.

Fragments from sculptures were used for a coffee table by Millim Studio from Italy.

Antique art (1): Two ancient marble busts looted from an archaeological site in Cyrene were returned from the Metropolitan Museum of Art in Washington DC to Libya.

Antique art (2): Italy is seeking the return of an ancient sculpture from the Minneapolis Institute of Art.

Antique art (3): The British Museum faces legal action from a UK heritage preservation organization over its refusal to allow the 3D scanning of a piece in its Parthenon marbles collection.

A marble bust stolen from the Oneida Community graveyard 20 years ago was discovered in a movie scene and brought back to a cemetery in New York State.

Video of the month: European Space Agency ESA’s Copernicus mission looks from space on the Carrara region and tells the story of the white marble.