China brought the natural stone sector worldwide back on track in 2021: the country recorded an increase of +25.7% (by value) in imports compared with the previous year 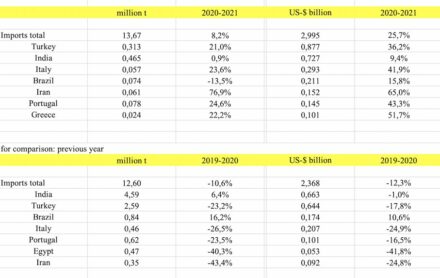 In terms of exports to the U.S., China even increased by almost +30%

A simultaneous look at China’s statistics for both imports and exports of natural stone shows the role the country still plays as a buyer, but also that, conversely, its importance as a supplier to the entire world continues to decline.

In terms of imports, there was an increase of +25.7% (by value) in 2021 compared to the previous year. As a rule, these were raw blocks, the value of which in total reached almost US$ 3 billion. The figures come from the China Stone Material Association (CSMA).

The list of suppliers includes all countries with efficient quarries. It can thus be rightly claimed that China has brought the industry back to full speed after the only moderate slump in the Covid-19 year 2020.

There was apparently no sign of problems in the supply chains; the increased transport costs were either passed on or absorbed somewhere.

If you look at the statistics of the supplier countries published so far, they confirm China’s role as the undisputed Big Fish among buyers. “Make for China“ continues to be the guiding principle of the stone sector, although this only applies to raw blocks.

In the case of end products, however, the stone sector, unlike its ceramic competitors, for example, has not yet managed to gain significant shares of the gigantic market with over 1,4 billion citizens. 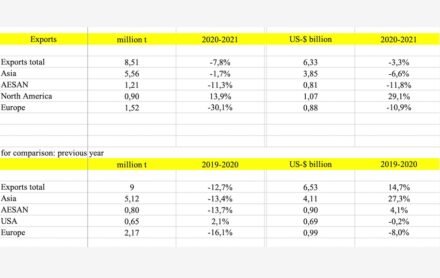 In the case of exports, the figures of the Association show something different: there was again a decline, by (-)3.3% by value. This was even more significant in the case of deliveries to Europe (-10.9%) and the ASEAN countries (-11.8%), and moderate in the case of other countries in Asia (-6.6%). In the previous year, the Asian economic area had recorded after strong increases, and before that again almost -10%.

One should not be misled by these declines. They are taking place at a very high level. However, it seems to confirm the long-standing trend that China’s stone sector wants to cater more than before to the growing and consumptive middle class at home.

In view of ecological considerations among customers in the West, the cheap materials from China will in any case have poorer market opportunities in the future than before due to transportation.

One figure in these export statistics is truly remarkable, namely the (+)29.1% increase in shipments to the USA. The total here was US$1 billion – more than many of the major exporting countries achieve in their overall balance sheets.

This strong plus is probably a consequence of the Covid-19 pandemic (which is just as evident in the 2021 statistics of the other major exporting countries): the significant demand for natural stone from private customers had initially been met from stocks alone, but then it became clear that citizens – in the absence of long-distance travel, restaurant visits or new clothes – really wanted to put a lot of money into upgrading their houses and apartments with natural stone.

Looking at China’s statistics, this probably means that the significant increase in shipments to the U.S. resulted from sellers there restocking in 2021. But that makes the 2022 figures really exciting: because they will tell us whether the stone sector has managed to extend the private demand boom from the pandemic into normal times.