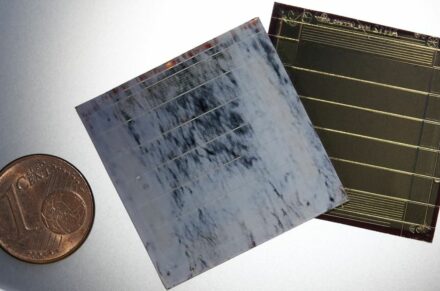 A new topic in solar cells is the so-called building-integrated photovoltaics (BIPV): the electricity-generating surfaces should not only be hidden on the roofs, where they can be placed in an optimal orientation to the sun, but should also be attached to a building façade, for example. The basic concept is that an integrated solar cell with low efficiency is better than a wall that provides no electricity at all. German researchers are currently working to make such cells interesting in appearance as well, giving them the appearance of marble, for example.

We quote from a press release: “Researchers at the Karlsruhe Institute of Technology (KIT) have developed colored solar cells which, in the long term, can be integrated into building façades and emulate the appearance of familiar building materials.“ We have linked the research report on this from the journal Solar RRL below.

In essence, it is all about so-called tandem solar cells: they consist of special layers that are precisely designed to work hand in hand. This means that if the top layer is colored, the ones underneath can make the most of the light that passes through to them, despite the color filter above.

However, as far as the appearance of such colored solar cells is concerned, the results have so far been poor: depending on the angle of incidence of the sunlight, their appearance changed and, moreover, they were generally unappealing.

Now the Karlsruhe researchers, together with their industrial partner Sunovation, have applied a well-known inkjet printing process for this purpose and achieved surprising success: “With our method, the color used is almost not at all dependent on the angle of incidence of the sunlight, but always looks the same,“ says one of the researchers.

What’s more, the printing technique allows the colors to be mixed, making it possible to print complex color patterns. “The researchers used this to produce solar modules with the appearance of different building materials. Perovskite solar modules in a white marble look were particularly efficient,“ the press release states.

Perovskite solar cells use a particularly low-cost semiconductor material. The topic is currently driving the industry because it could enable promising power generation even in unfavorable locations. At present, Perovskite solar cells are already achieving efficiencies of over 25 % in the laboratory. The task now is to transfer these results to larger cells.