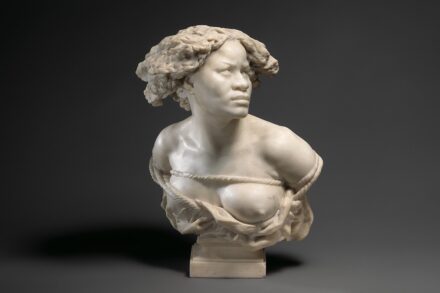 “Fictions of Emancipation: Carpeaux Recast“ is the first exhibition at The Met to examine Western sculpture in relation to the histories of transatlantic slavery, colonialism, and empire. The show is organized around the bust “Why Born Enslaved!“ by French sculptor Jean-Baptiste Carpeaux from 1868. Created in the wake of American emancipation and some 20 years after the abolition of slavery in the French Atlantic, the white marble sculpture was shaped by the enduring popularity of antislavery imagery, the development of 19th-century ethnographic theories of racial difference, and France’s colonialist fascination with Africa.

Through March 05, 2023, the exhibition at The Met Fifth Avenue will explore the place of Carpeaux‘s sculpture within these contexts. More than 35 works drawn from The Met’s holdings and collections in Europe and the United States will offer an in-depth look at portrayals of Black enslavement, emancipation, and personhood, challenging the notion that representation in the wake of abolition constituted a clear moral or political stance.

Carpeaux drew on classical archetypes of the captive figure for “Why Born Enslaved!“. While the subject’s resisting pose, defiant expression, and accompanying inscription have long been interpreted as conveying a powerful antislavery message, Carpeaux’s bust also visualizes longstanding European fantasies about the possession of and domination over the bodies of Black people. A section reveals the artist’s creative process, demonstrating how he arrived at the final composition through a series of his clay and pencil sketches of kneeling and bound figures.

The exhibition mainly consists of sculptures created around the 19th century, but will also include painting, ceramics, works on paper, and two contemporary pieces. Together, these objects will offer an opportunity to consider the formative role visual art has played in shaping enduring misconceptions of racial difference, as well as the vital role it might yet play in dismantling them.