The Lincoln Memorial in the U.S. capital was dedicated 100 years ago 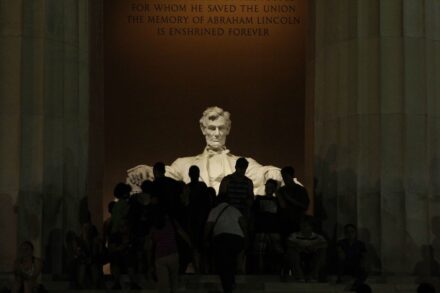 The USA is not famous for its domestic natural stones, after all, they were hardly exported to the world. And yet they exist, and many of them can be found in one place: it’s the Lincoln Memorial at the west end of the National Mall in the federal capital, Washington DC. The monumental structure in the style of a Greek temple was inaugurated on May 30, 1922, and just turned 100 years old.

It commemorates Abraham Lincoln (1809-1865), the 16th President of the United States, whose anti-slavery policies paved the way for the country to become a modern state. Although at that time, the still young nation was divided into northern and southern states, which even went to war with each other, Lincoln managed to prevent a final separation into two countries.

Historians like to sum it up by saying that Lincoln decided as to how one would later speak of the U.S.: as “The United States is,“ as it is called today, or “The United States are,” as it actually should be called according to grammar.

The architect of the building was Henry Bacon. Following the models from antiquity, he wanted white marble as the material for the exterior facades and the mighty columns outside and inside, as well as the interior. 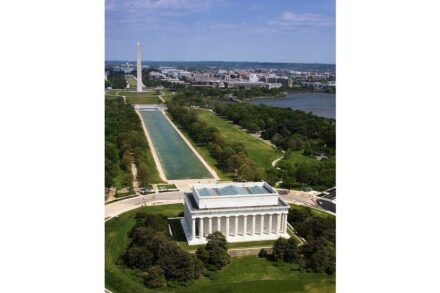 On the outside, Colorado-Yule marble was used. We have linked a webpage that tells episodes about the project.

The National Park Service (NPS) lists the other types of stone: “The granite at the terrace level came from Massachusetts, … while the pink marble floor of the chamber came from Tennessee. One will notice the Indiana limestone on the interior walls and columns of the chamber, and the Alabama marble used for the ceiling tiles (soaked in kerosene to give them a translucent appearance). The statue of Lincoln was carved from Georgia marble. These stones from several parts of the United States, symbolize the importance of the Union to Lincoln.“

Numerous details recall the central content of Lincoln’s message: on the walls inside are excerpts from his Gettysburg Address and his 2nd Inaugural Address.

The 87 steps that lead from the reflecting pool to the terrace refer to the “Four score and seven“ from the Gettysburg Address, which, according to today’s reading, is the number 87. With this, Lincoln recalled that the Fathers of the United States had created the new country so many years ago, with equality for all people as its fundamental idea.

Lincoln‘s massive statue, 8.50 meters tall and weighing 175 tons, was designed by artist Daniel Chester French and carved in stone by the Piccirilli brothers. Unusual for the time, Lincoln is seated, not standing. Art historians argue what the artist wanted to express. The statue has one hand clenched into a fist while the other is completely relaxed. The artist himself always resisted giving the viewer an interpretation: “A statue has to speak for itself, and it seems useless to explain to everyone what it means. I have no doubt that people will read into my statue of Lincoln a great deal I did not consciously think. Whether it will be for good or ill, who can say?“

The 36 columns on the outside commemorate the states the U.S. had at Lincoln’s death. Later members of the Union were inscribed on the frieze. There is a plaque on the steps to the plaza for Alaska and Hawaii, as they joined the Union after the Memorial had been completed.