During the 2022 Bond Events-Five Star held in The Bahamas, Brazilian exporters introduced the large variety of their natural stones to about 50 senior professionals of architects and interior designers 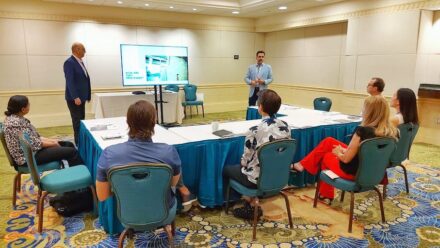 The Brazilian stone sector participated in the 2022 edition of the Bond Events-Five Star, held from May 19th to 22nd, in The Bahamas, Nassau. The national participation happened in two ways: through the presence of companies of the segment directly selected by the Brazilian Trade and Investment Promotion Agency (ApexBrasil) to participate in Business Rounds during the four days of the event; and in an institutional way, through It’s Natural – Brazilian Natural Stone, a project of support to the natural stones exports carried out by the Brazilian Center of Natural Stones Exporters (Centrorochas), in partnership with the national Agency.

Bond Events is known for connecting suppliers with designers and large architectural firms responsible for the construction of high luxury hotels around the world, through business rounds and mini lectures. “And this was the first time that the stone sectoral project was presented in an event directly focused only on architects and interior designers, in a proactive way, generating demand and representing Brazilian companies,” emphasized the vice-president of Centrorochas, Fabio Cruz.

The Brazilian stone sector was shown to about 50 senior professionals of architects and interior designers, representing large American and even European offices. There were eight meetings with groups of up to six people and presentation of the national segment by the vice-president of Centrorochas and the international specifier specialized in Brazilian natural stone, Paulo Giafarov. They had the opportunity to present the Brazilian sector, highlighting all the geological diversity, the strong points and the possibilities of use of the national products.

The action is part of the Brazilian stone sector’s new initiative to encourage exports through direct actions generating demand among specifiers and opinion makers. “Our materials are always surprising for their colors, textures, patterns, and finishing quality,” said Giafarov during the meetings.

“There were several meetings, in which we had the opportunity to present, to selected groups, Brazil’s potential not only for the privilege of having large mineral reserves and geodiversity, but also to talk about our know-how in extraction, manufacturing park and, more than that, the competence that some companies have already acquired to supply large constructions,” pointed out Fabio Cruz, who also emphasized that the national sector needs to invest more in technological, structural, and process evolution to be able to supply the large construction market. “In this event, the possibility of interaction that we had with each group, the receptivity of the professionals, and the realization of their lack of knowledge about the materials and capabilities of Brazilian stones, called our attention the most“ he added.

About It’s Natural – Brazilian Natural Stone
It’s Natural – Brazilian Natural Stone is an export incentive program developed by the Brazilian Center of Natural Stone Exporters (Centrorochas) in partnership with the Brazilian Trade and Investment Promotion Agency (ApexBrasil). The program aims to stimulate and increase the exports of Brazilian natural stones, through a set of strategic actions for internationalization with promotional activities, strengthening the image and development of the sector in the world market.
https://braziliannaturalstone.com/

About Centrorochas
The Brazilian Center of Natural Stone Exporters is present in all the national demands to increase the competitiveness of the natural stone sector. The entity acts directly supporting the procedures related to the presence of Brazilian entrepreneurs abroad, combining commercial and operational activities related to the development and evolution of Brazilian companies.
https://centrorochas.org.br/

About Apex Brasil
ApexBrasil works to promote Brazilian products and services abroad and attract foreign investment to strategic sectors of the Brazilian economy. In order to achieve these objectives, the Agency carries out diversified trade promotion actions aiming at promoting exports and enhancing the value of Brazilian products and services abroad, such as prospective and trade missions, business rounds, supporting the participation of Brazilian companies in major international fairs, visits of foreign buyers and opinion leaders to be introduced to the Brazilian productive structure, among other business platforms that also aim at strengthening the Brazil brand.
https://apexbrasil.com.br/