For the new altar of the Hedwiskathedrale in Berlin, the faithful of the diocese can contribute small stones 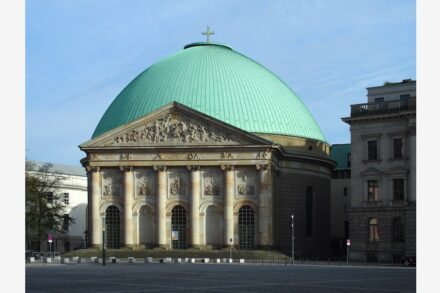 Stones are being used unusually in the redesign of Berlin’s Cathedral of Saint Hedwig: faithful from the Archdiocese of Berlin are invited to bring a small stone from home to a service on Corpus Christi (June 16, 2022) and place it on the steps in front of the church. Artist Leo Zogmayer had the idea to cast the pebbles in resin and use the conglomerate to form the new main altar for the church and the pulpit (or ambon) next to it.

Heiner Koch is the archbishop of the Catholic diocese that spans Western Pomerania, Berlin, Brandenburg, and Saxony-Anhalt. He outlines the concept, titled “Lebende Steine“ (Living Stones) in a pdf: the little stones are meant to reflect the diversity of the people, and the conglomerate is a sign that the faithful belong together, even though they live in many places. In a video, he says of the action, “There are almost no limits to your imagination and motivation.“

According to the plans of the architects Sichau + Walter, the altar will have the shape of a hemisphere, bringing the dome of the cathedral upside down to the ground. The ambon, in contrast, next to it will be angular.

Currently, the Hedwiskathedrale is being redesigned, and, of course, there was a fierce dispute about it. After all, the church is a special gem in Berlin’s city center and is a special reminder of the German Democratic Republic.

It is an inconspicuous round building that does not stand out above its surroundings, but that invites passers-by to look to see how the architecture continues inside.

There, one could previously experience the magnificent effect of the dome and, as a highlight, a lower church, which in turn could be reached by a wide staircase in the middle of the room. 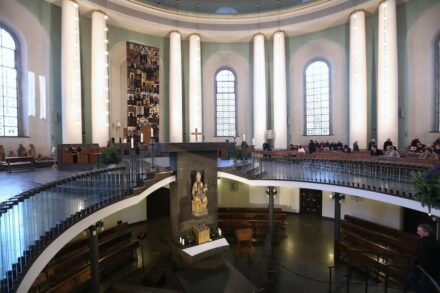 Inevitably, therefore, the altar always seemed to be pushed to the edge, and there was a distance between the priest and the faithful due to the 8-meter-wide hole in the floor.

Now, according to the plans of the architects, the lower church will be covered, and the altar will be placed in the center of the room.

However, the lower church will still be accessible.

The cathedral stands on a plot of land that the Prussian King Frederick the Great had given to the Catholic community in Berlin. The architect was Georg Wenzeslauf von Knobelsdorff. In the king’s sketches, the Pantheon in Rome is unmistakably the model. In 1773 the church was consecrated, and in 1887 the exterior design was completed. It was badly damaged during the 2nd World War but was rebuilt in 1952.

Hans Schwippert completely redesigned the interior from 1960 to 1963 during communist times and created the open lower church instead of a crypt. The floor is covered with black Kapfenberg marble.

43 million € are estimated as costs. The reconstruction is scheduled to be completed in 2023.