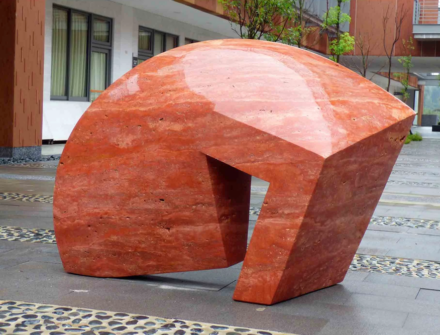 “There is so much life inside a stone,” Dutch artist Karin van Ommeren patiently responds by email to our many questions, “There are so many stories to tell.” The hallmark of her sculptures, ranging from monumental size to tombstone objects to small things for the home, is that they are always simple forms. 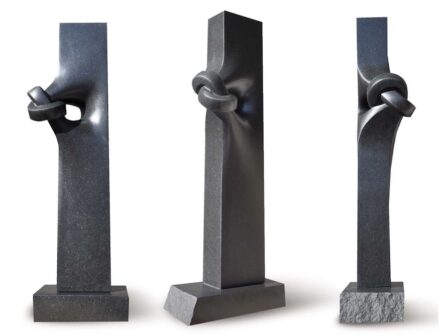 Only occasionally, for example, is there a small knot in an upright stone staff that might be understood as a laugh or an exclamation point.

The stories she tells in these works are those from within the stone: when the surface is worked, she is left with simple and smooth surfaces. They then have the function of a screen or canvas: nothing can be seen but the color of the stone, which is normally hidden, or its inner structure. 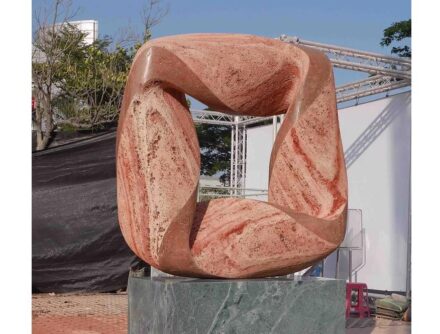 The best examples of such works are those made of red travertine from Iran: a varnish coating from chemical production could not show a more beautiful red, and the flaws in the material do not want to be filled and sanded.

As a story, one could tell how the stone was formed by nature and in which processes the color, and the flaws were created.

But such questions from science do not seem to interest her. At least she does not address them on her webpage or in the parallel blog.

Rather, she is interested in the people who had to do with the stone. “Where there are quarries, the history of the population is intertwined with it. The families worked in the quarries, and the villages and streets are made of local stone, just like the palaces and temples of the kings and gods are. So, when you take a piece of stone in your hands you are aware.“ 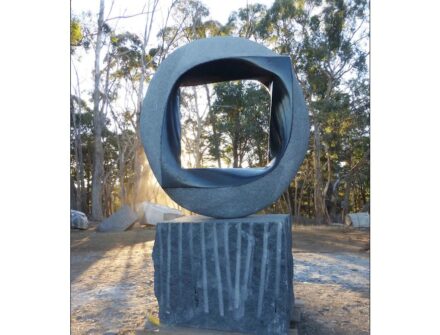 Sometimes her works are also under a theme and tell the story about it. In the case of The Power of Asclepius, it was about the ancient story of the Greek god of healing. In this work, she wanted to express appreciation for medicine and hygiene during the pandemic.

Her blog, where she regularly posts short thoughts, is filled with these stories. There you can read about her fascination with quarries: “A rough and beautiful scenery at the same time. The powerful energy you find there in this ,destroyed’ landscape was something that always inspired me.“ 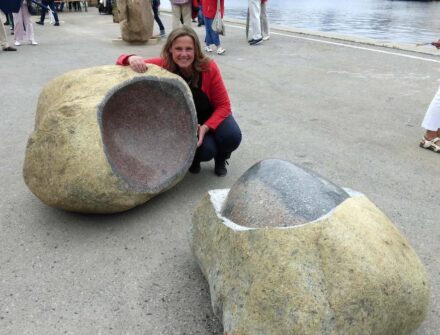 She also works on boulders and quips: “These potato-like stones carry an invisible treasure inside.” She always works only a part of these boulders. The rest remains unchanged and announces that “that also the inside of these ‘potatoes’ is absolutely beautiful,” as she puts it.

Karin van Ommeren studied at the Hoger Sint Lukas Instituut in Brussel and at the Academy for Fine Arts in Anderlecht and Brussels. Afterward, she also worked as a teacher for stone sculpture in Amsterdam and Haarlem. On her webpage, you can also find drawings by her. 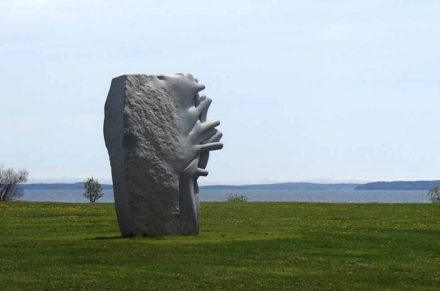 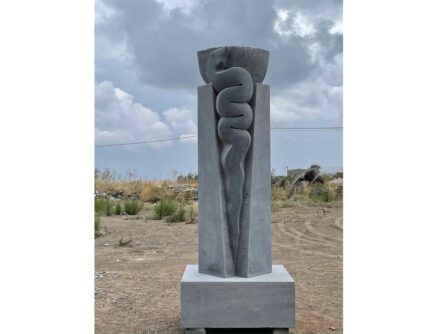 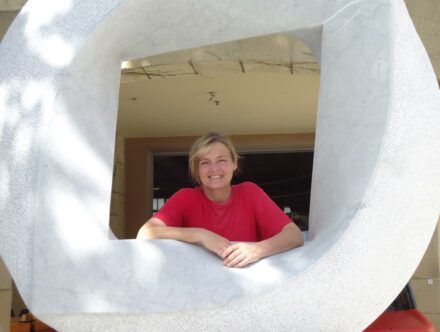