Re-launch of Stone+tec after a four-year break: for the first time, the program included a congress that brought architects to the show 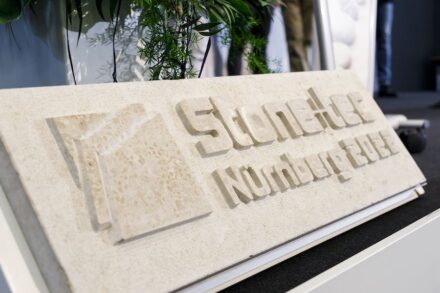 The trade fair in Nuremberg, Germany, is ambitious to attract more suppliers of natural stone slabs and finished products again

There had been no Stone+tec for four years because of the Covid-19 pandemic, so expectations were high for the re-launch in June 2022. And it was a success, according to our impression from talks with exhibitors and visitors. Some new approaches in the program suggest a positive continuation in the next edition in two years (June 19-22, 2024).

During the four days of the exhibition this year (June 22-25, 2022), around 9600 visitors came to the Nuremberg fairground which has a direct subway connection. And there was a big surprise for those arriving by subway: the carriages were packed with young people talking in English – had the new organizer AFAG worked the wonder of making Stone+tec an international hotspot again, as it was a few decades ago?

The impression was deceptive because the young people had turned up for the Embedded World computer trade fair, which was taking place at the same time at the Nuremberg fairground, too.

Stone+tec no longer has the international appeal that characterized it in the 1990s when it was a strong competitor to the likewise biennial Marmotech in Carrara (which no longer exists).

In the meantime, the show in Nuremberg has as its core target group stonemasons from German-speaking countries. Accordingly, most of the guests came from Germany, Austria, and Switzerland, “in the international field, visitors from Italy, Poland as well as Northern Europe and the Baltic States were most strongly represented,“ according to a press release.

However, the long-term goal of the new organizer AFAG – which has taken over the show from NürnbergMesse – is to make Stone+tec again of a hub for the cross-border business with natural stone for architecture and interior design. 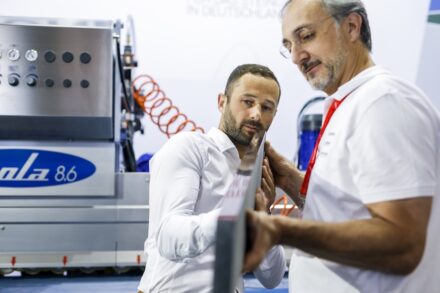 Until now, the focus had been on machinery, tools, and gravestones.

To get the natural stone traders back on board, there was a vital novelty at this Stone+tec: for the first time, a congress was held on the first day on architecture with stone and on the second on restoration. On the first day evening, the German Natural Stone Award was handed over to the winners. We will report.

By bringing architects to the fair this way, the aim is also to attract sellers of stone slabs and finished products.

It should be noted: The fair must achieve this goal from its own resources – there is no state funding, for example, for architects‘ visits or buyers‘ tours.

With around 200 participants at the congress (which the topic of cemeteries and gravestones on the 3rd day), the start was impressive.

There were already positive signs of strengthening the international profile of Stone+tec: for the 2024 edition, “companies and associations from Turkey and Italy, for example, had already expressed strong interest,“ according to the organizer.

In addition to the congress, the organizer had placed particular emphasis on innovations, which were displayed in a separate area. The topic here was digitalization in the stonemasonry trade, and visitors could learn first-hand how scanners, 3D printers and other electronic aids are useful for the design process. Another new feature was a live Workshop, where application technicians from various companies will provide tips and tricks on laying and installing sophisticated materials.

There were only a few exhibitors from the gravestone sector this time.