Michael Heizer’s “City“, a vast complex of shaped mounds and depressions made of compacted dirt, rock, and concrete, is open to the public now 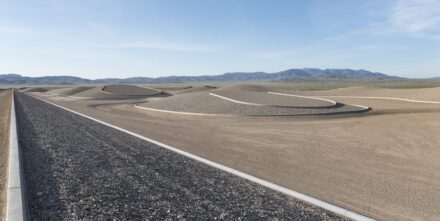 After more than 50 years in the making, the monumental sculpture in the Nevada desert is reminiscent of ancient ceremonial sites and suggestive of modern city structures

Michael Heizer’s monumental sculpture, the “City“, which has been in the making for more than 50 years, is completed and open to the public (see Visitor Information below). A mile and a half long and a half mile wide, it is a vast complex of shaped mounds and depressions made of compacted dirt, rock, and concrete. Located far-off in the Nevada desert, it is intentionally reminiscent of many ancient ceremonial constructions through its complexity and size, but its form is suggestive of the central hub or nucleus of a modern city.

Describing the City, art critic Dave Hickey wrote, “Approaching the cut on foot from the north or south, elements of a cityscape seem to be rising or falling from within the excavation that cuts flat into the rising ridge… As one walks up to an overlook, Heizer’s cultural interventions open out the space. The roads and domes and pits within the excavation are elegantly curbed into long, quiet Sumerian curves. They restore our sense of distance and scale, so the complexity of City reveals itself as a gracious intervention in the desert… composed and complete.”

The photos also reveal how the light changes our perception of a landscape or urban structure. It is interesting to speculate how future generations might understand Heizer’s geoglyph-like work.

The artist is known for producing large outdoor earthwork sculptures and for his work with rock, concrete, and steel that exists both outside and inside museums and galleries. He started to build the City in the early 1970s in a continuation of the work he had created in the West where he was born, beginning with the negative North and South in the Sierras (1967), and anticipating the epoch-making Double Negative at Mormon Mesa (1969). His earthworks, which live outside in the environment, are known to elicit responses not common to architecturally dependent artworks.

Acquiring remote parcels of property over the decades, consolidating them into the ideal location for his sculpture, and using materials mined from the land itself, Heizer merged his interests in non-inhabited forms in Native American traditions of mound-building, the pre-Columbian cities of Central and South America, and his studies of Egyptian construction with his singular ability to work with immense variations in scale, perspective, and viewpoint. The result is a lifetime achievement of breathtaking complexity and size, evoking ancient ceremonial constructions while also suggesting the forms of a modern city’s central hub.

Triple Aught Foundation respectfully acknowledges that the City has been created within the ancestral territories of the Nuwu (Southern Paiute) and Newe (Western Shoshoni), who lived in and around the vicinity and call this land home, as their ancestors did before them.

The project is located in an isolated valley within the high desert of Nevada‘s Great Basin that has been the grazing land for cattle and sheep for at least a century. Surrounded by primitive wilderness, it is near the bases of several mountain ranges of nearly 12,000 feet in elevation and near the White River narrows, which was active during the post-Pleistocene era.

Triple Aught Foundation Board member Michael Govan, CEO and Wallis Annenberg Director of the Los Angeles County Museum of Art, said, “Over the years I would sometimes compare Michael Heizer’s City project to some of the most important ancient monuments and cities. But now I only compare it to itself. It’s an artwork aware of our primal impulses to build and organize space, but it incorporates our modernity, our awareness of and reflection upon the subjectivity of our human experience of time and space as well as the many histories of civilizations we have built. Working with Michael Heizer for more than 25 years to help him realize his City project has been one of the most important experiences of my own life and work.”

Visitor Information, as on the foundation’s webpage:
Visitation for 2022 has officially closed, but we encourage you to reapply next year. The Triple Aught Foundation will begin to accept reservations for the 2023 season on January 2, 2023, at 12:01am PST. Reservations will be accepted through the Triple Aught Foundation website at that time. Visitors will be accommodated on a first come, first serve basis. Only short day-trips will be possible for a maximum of six visitors ages 16 and over, with prior reservations only, and only in favorable weather. City is on private property in rural terrain, and it has no habitable structures. Visiting without a pre-arranged visit is thus potentially dangerous, and it is strictly prohibited and is trespassing. The price of a visit is $150/adult, $100/student, and is free (but with reservations still required) for residents of Lincoln, Nye, and White Pine, Nevada, counties.