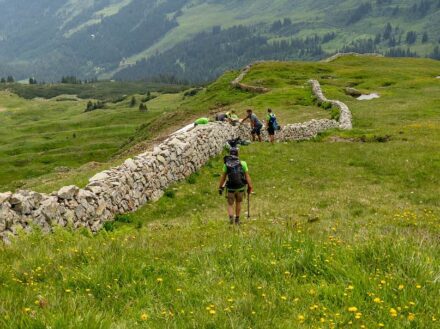 A special stone project took place in June 2022 in Kleinwalsertal in Austria: a group of 40 apprentices had traveled from Stuttgart in Germany to rebuild and secure a 200-year-old and 700-m-long dry-stone wall in the mountains. The years had taken their toll on the structure, which is visible from afar across the mountain meadows. Some of the stones, which had been assembled without mortar, had fallen apart and rolled down the slope. 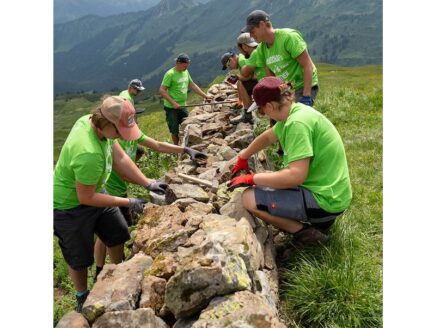 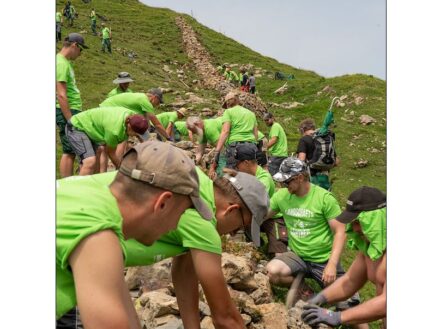 The apprentices came from 12 companies and brought their instructors with them. For: in addition to the know-how of how to build dry-stone walls, team building was also one of the learning objectives.

For example, the young people learned how to cooperate at work in passing: the best way to move stones uphill is to form a chain and throw them to each other, and when working with heavy stones you have to work together.

The morning climb from the night’s lodging in a mountain hut to the construction site with its fantastic panoramic view was an emotional start on each of the three project days.

The work was also a history lesson for the young people: the stones were formerly collected from the mountain meadows to create more space for grass and to avoid injuries to the grazing animals; the walls made of these reading stones were used to fence off the pastures or to demarcate the terrain of the villages from each other.

The renovated wall was used to separate the alpine pasture of Ifersgunt and Halden and at the same time the villages Bezau and Egg. 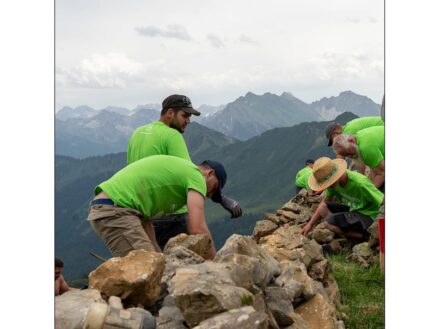 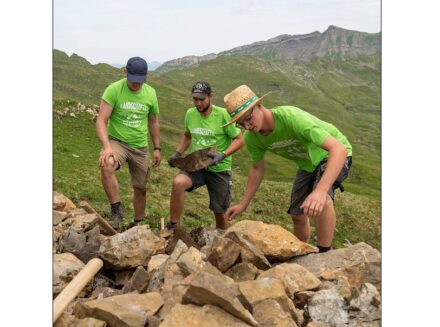 It was erected in 1816 and is meticulously described in the archives: three and a half feet wide, four feet high, right through the middle of a previous primeval alpine pasture, that is, a pasture still entirely without markings. The region is now popular with tourists as the Bregenzerwald, and the mountain with this dry-stone wall is the Hählekopf, part of the Ifen European Protected Area (Europaschutzgebiet Ifen).

In Austria and Switzerland, there are numerous initiatives to preserve the dry-stone walls on the mountain. After all, on the one hand they are cultural assets, and on the other they provide important habitats for animals and plants in the harsh mountain climate.

In many cases, they also secure the slopes against landslides or avalanches. Then they are either placed directly on the slope as supports or stand a short distance in front of it so that the snow masses behind them are intercepted.

The Austrian province of Vorarlberg, to which Kleinwalsertal belongs, has listed its mountain walls in an inventory.

The stones used for the wall at Hählekopf are the Schrattenkalk and the Brisi sandstone. The sandstone is more suitable because it is naturally more angular and thus holds the individual stones together more compactly.