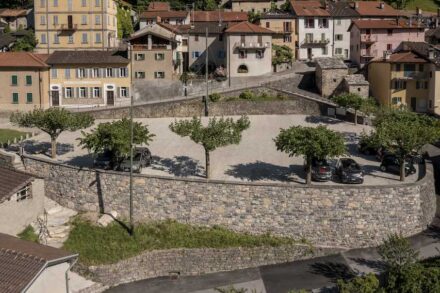 Cabbio in Swiss Ticino is a village of about 250 inhabitants right on the border with Italy. The architect Enrico Sassi had undertaken the modernization of the village square; we had described his works more often. 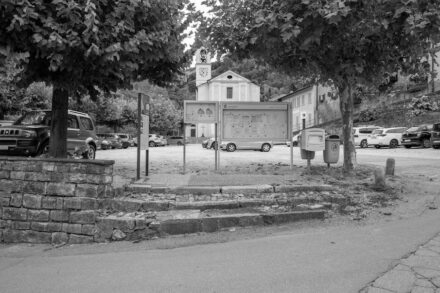 The square was in a bad state of disrepair, with broken retaining walls and a surface that turned into mud when it rained. It is important to know that the site is located directly in front of the church and is used a lot because visitors to the masses and the cemetery park their cars there.

Enrico Sassi was concerned with preserving the square in its current uses while giving it an improved appearance and making it ready for new ideas in the future.

He gave himself three central fields of action: preserve and secure the slope wall, beautify the square with appealing outdoor furniture, and solve the stormwater problem. 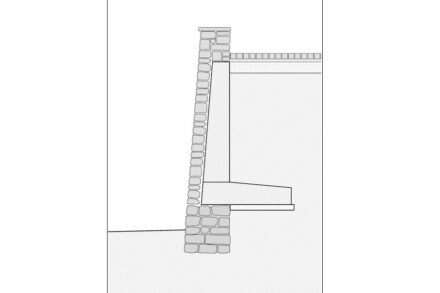 For this purpose, the square was first completely removed. The new retaining wall now has a reinforced concrete wall on the slope side, in front of which the old stones were rebuilt. The large pieces of stone found in the excavation were used for the wall foundations.

The stone used is the Pietra di Saltrio limestone.

Special attention was given to the covering of the retaining wall: the original stones were laid out again in their old position and order. Some of them bear bowl-like depressions, which tell that long ago they were used in local mining for cupellation. This was the name given to the process of separating valuable metals. 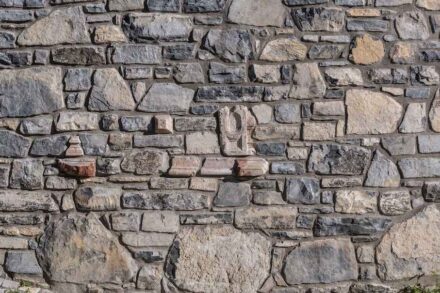 Other finds from the excavation were ornamental elements made of Arzo marble, which have now visibly found a place in the supporting wall. 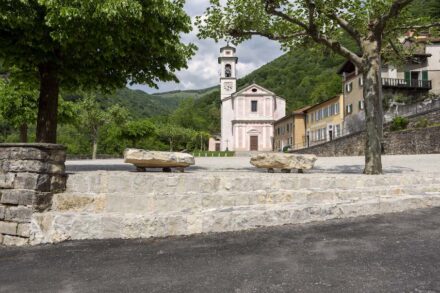 In general, Enrico Sassi pays great attention to detail: some of the large finds made of Moltrasio stone serve now as benches. 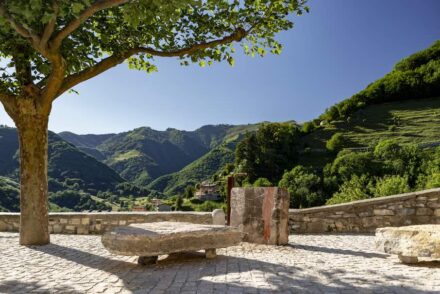 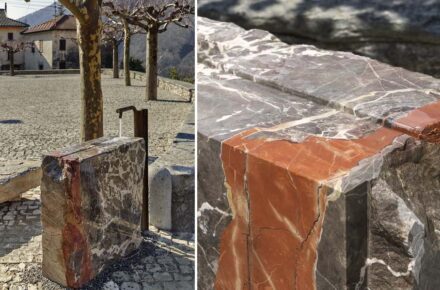 A highlight is the fountain behind the church: here an old block of Arzo marble was used, whose spectacular colors are impossible to get enough of. For the water spout metal parts of the previous fountain were reused. 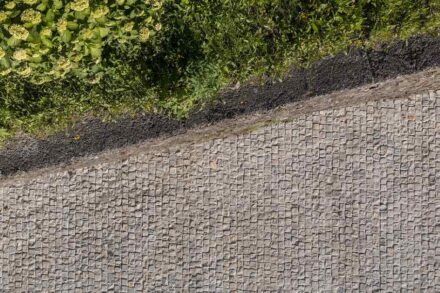 Also new to the square is the paving of the surface with 10x10cm cubes of Saltrio limestone. “The new flooring is waterproof and grouted with cement mortar,“ writes the architect. 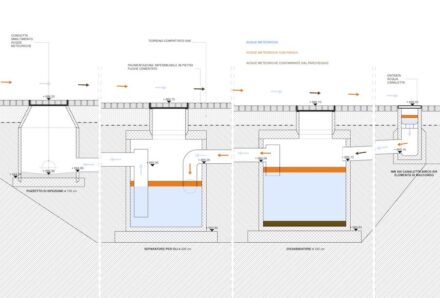 This decision was important insofar as oil can get into the rainwater in the parking lot. An elaborate solution was designed and installed for this purpose: the collected rainwater passes through several purification chambers so that it can be returned to nature afterwards.

In the long term, the plan is to “limit parking through a municipal ordinance,“ according to a newspaper report.

The old trees in the square were dug up, temporarily stored and then replanted.

To inaugurate the redesigned square, there was a big civic festival in May 2022, which included a large communal meal. “Cabbio in Festa“ was the title.

The project was awarded one of the titles of Best Swiss Villages 2022.

It is also worth mentioning that the LaRegione daily newspaper mentioned 900,000 Swiss francs as the cost of the works in the village. Originally, a budget of 400,000 CHF had been estimated. However, the newspaper also writes: “half of the amount (comes) from institutions and private individuals.“ 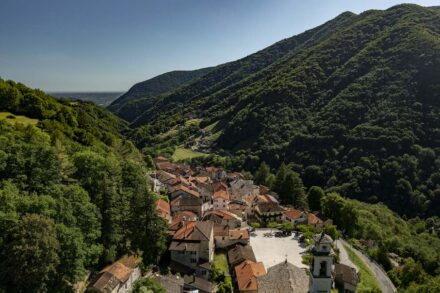 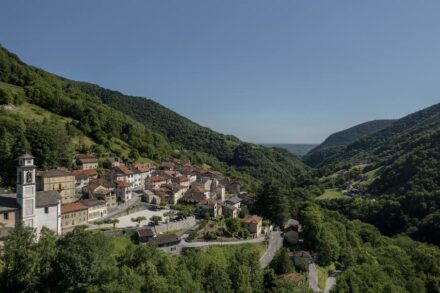