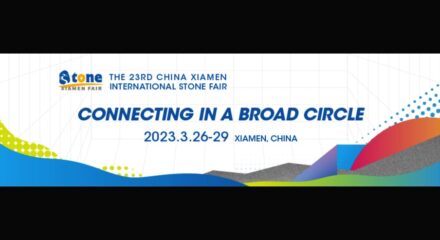 The new focal points introduced in the middle of the pandemic, such as the “Habitat Design & Life Festival,“ are established in the profile of the show

The positive numbers announced by Xiamen Stone Fair for 2022 probably express the exhibitors‘ and visitors‘ appreciation that the fair team struggled to make the event happen despite Covid-19.

We remember that after the first news about the new form of flu from Wuhan went around the world in December 2019, Xiamen Stone Fair was one of the first to respond to the new situation. It was originally scheduled for its standard March date and 2020 was also to celebrate its 20th edition – and then it had to be postponed three times during the year.

In fall, the organizers came out with their “Cloud“ as a virtual offshoot and announced a hybrid event with online and live parts for 2021.

But that’s not all: they gave the coming issue new accents, in the middle of the crisis. The main topics were stone and design and the use of stone in everyday life. “Habitat Design & Life Festival“ was the overall title.

An entire hall was made available for the presentations. Other novelties of the 2021 edition were guided tours on the fairground, which could also be viewed time-delayed on the net.

In this respect, the exhibition team seemed to have found a good answer to the pandemic. After all, vaccinations had come up worldwide and the opinion had prevailed that humanity could somehow live with the virus.

But, to put it metaphorically, in 2022, the pathogen struck back in China: in the first few months, there were mass infections again in various parts of the country, including Shanghai, and the government in Beijing again imposed strict lockdowns.

The stone fair was postponed again, first from March to May, then to summer, and finally held from July 30 to August 02, 2022.

Here are the visitor figures for this year, which we announced above and which the trade fair company has made available to us: 1083 exhibitors presented themselves on a total area of 162,000 m².

This was still a significant drop compared to the years before the pandemic (a good 2000 exhibitors and around 180,000 m²).

But these are positive numbers. Note: due to travel restrictions, the fair had to have a special look at Asia and the Pacific region.

89 groups of visitors came to the fairground, according to the organizer. Overall, there was an increase of +5.05% in guests compared to 2021.

In its press release, the trade fair takes a special look at those visitors who had been invited as part of its Buyers Program. Their number amounted to 502: 55.9% were interested in stone or machinery, 28.37% came from the fields of architecture and design.

The above-mentioned special festival of the previous year had “Stone and Vitality“ as 2022 theme. The product design section revolved around “Stones in the Garden.“

The Global Master Architects Forum was attended by an audience of 500. Keynote speakers were He Jingtang and Daniel Statham.

At the Launch Out @XSF – New Product Release, 32 companies presented their innovations, including super-thin stone and new surfaces.

During the World Stone Congress, 14 forums were held, where 20 industry leaders provided information on current developments.

Brand new this year was the Natural Stone Varieties Collection. “A collection of 268 natural stone samples were displayed in 10 categories, revealing the current most popular varieties in the market,“ according to the press release.