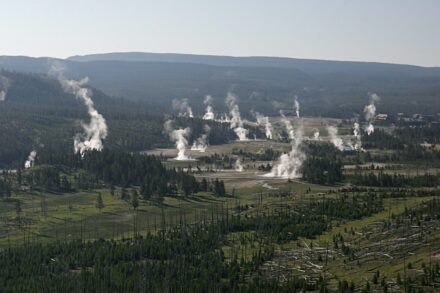 In the geysers, mud pots or steam fumaroles, the forces of the earth’s interior come right up to the surface

Yellowstone National Park in the USA is the oldest national park in the world. It was established on March 01, 1872 and celebrated its 150th birthday this year (2022). Named after the largest river in the area, the Yellowstone River, it is famous for its populations of wolves and grizzly bears or the bison herds.

However, the 3 million or so visitors to the park each year hardly notice the animals – the places where the forces of the earth’s interior show themselves on the surface offer enough spectacle: for example, in the Old Faifthful geyser with its regular eruptions, in the incessantly bubbling mud pots or the fumaroles where steam shoots out of the earth. Spectacular are also the dazzling colors of the Grand Prismatic Spring or the Morning Glory Pool.

The energy source of all these phenomena is heat rising up from the Earth’s mantle. Essentially, it is generated deep inside our planet as radioactive elements decay; some of it probably dates back to 4 billion years ago, when Terra was a hot ball of rock in space. 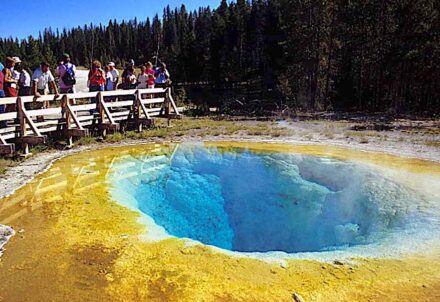 Scientists from many disciplines have long studied the subsurface beneath the national park, and in recent decades there have been surprising findings. The most important are:
* Yellowstone is a currently dormant supervolcano above a magma chamber about 80 km long, 40 km wide, and 8 km high. It holds about 20 to 25,000 cubic kilometers of hot stone, which is liquid to very viscous;
* such supervolcanoes do not always have the famous cone shape of volcanoes, but are often not visible at all on the surface. They can be identified only by the magma chamber beneath them, which continuously depressurizes via geysers, hot water explosions, etc., but also erupts again and again, occasionally even in super-eruptions with enormous destructive power;
* the Yellowstone volcano is also not located at the boundary of a tectonic plate, but above a hotspot, a kind of high chimney that brings hot material to the top. Another well-known example is the hotspot in the Pacific Ocean, at the top of which currently lies Hawaii;
* the continental plate with the Yellowstone volcano is slowly moving across its hotspot. Just as Hawaii is only the most recent of a chain of inselbergs in the ocean, so there is a chain of traces of past super-eruptions from Yellowstone eastward;
* the traces of such events are also unusual: namely, when the magma chamber has discharged at a depth of a few kilometers, the earth’s crust above may collapse and plunge into the depths. In fact, a chain of such calderas extends eastward from the Yellowstone volcano, but the millions of years since the eruptions have made them difficult to identify. Incidentally, today’s Yellowstone terrain arrived above the hotspot about 2 million years ago. 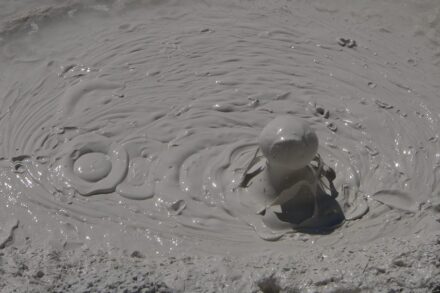 Most recently, researchers from the U.S. and Denmark have studied the paths that the hot water takes from a depth of about 1 km to the surface. In the process, it is directed by lava flows and cracks in the rock and at the same repeatedly heated up by the hot lava.

An investigation of the Geological Society of America could prove two so far unknown super eruptions of the Yellowstone volcano by their traces in the terrain. The scientists ask the question: is the Yellowstone hotspot perhaps in the process of subsiding?

“Where does all the hot water come from?”

“Is the Yellowstone hotspot waning?”