On the occasion of the 60th anniversary of the Acrilica 218 lamp, Oluce presents an exclusive version with a Portoro marble base 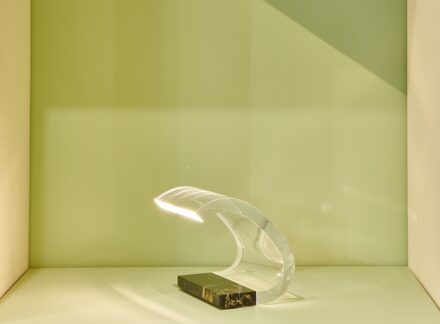 In 1962, Joe Colombo and his artist brother Gianni created the lamp “281” soon nicknamed “Acrilica”. On the 60th anniversary of the revolutionary design object, Italian company Oluce presents an exclusive version with a Portoro marble base replacing the original’s lacquered steel. The company sent us a press release:

The name, Acrilica, derives from the main component material of this object, and from the extraordinary use that was made of it in the design of this lamp. Methacrylate had, in fact, already been used for about a decade in the field of lighting, usually in thin cut or thermoformed sheets, while in this project it found a completely innovative use.

The 281 was, in fact, made with a methacrylate element of a considerable thickness and with a curvature which, thanks to its conduction properties, enabled the light of a bulb contained in the base to travel up along the transparent body until lighting up the head. The light source is then encased in the base and the thick sheet of transparent methacrylate acts as a conductor, transporting the light in an ingenious way to the top. 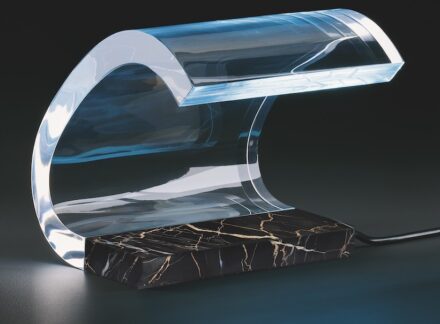 Antonio Verderi, president of Oluce, says: “For Oluce, Acrilica has been one of the most challenging and complicated projects in our company’s history. Crafting the curve of the methacrylate into the exact signature shape proved highly complex and involved several months of experimentation. In addition, during the 1960s not a great deal was known about this material as it was considered to be on a par with any other plastic. Joe Colombo was a true visionary in seeing it as a means to conduct light. We might almost say he foresaw the modern-day LED lighting system.“

“Because of this, Acrilica marked a real turning point in the world of appliance design and this has always been a source of pride for us. So, to celebrate the most significant anniversaries, we decided to present limited editions incorporating exquisite materials. For the thirtieth anniversary we created a superb silver base and this year, to celebrate the sixtieth anniversary, we have chosen Portoro marble, one of the most precious marbles and one of the most complex to work with.“
Acrilica has historically been recognised as a radiant, astonishing object in its ingenious simplicity, precursor to and forerunner of the contemporary optical fibre.

Thanks to these innovative features, it won the gold medal at the XIII Triennale di Milano in 1964, and was included in the permanent collections of the most renowned art and design museums in the world, such as “MoMa” in New York, “Die Neue Sammlung” in Munich and the “Philadelphia Museum of Art” in Philadelphia.

The special version of Acrilica with a Portoro marble base is produced in a limited edition.