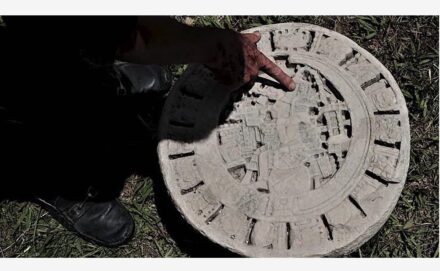 In the year 687 A.D., the kingdoms of Lakamha‘ and Po‘p, settled in today‘s archaeological zones of Palenque and Toniná, respectively, began a bloody war that lasted 24 years. However, new studies shed light on the cosmogonic universe and rituals that both societies shared despite their political rivalry.

Such is the case of a stone disc, with the iconographic representation of the young god of corn, that specialists of the Mexican National Institute of Anthropology and History (INAH), discovered in 2021, in the Temple of the Sun of the Archaeological Zone of Toniná, in Chiapas.

According to Juan Yadeun Angulo, in charge of the research and conservation of the site, the location of this limestone disc – 45 cm in diameter and 9 cm thick- stemmed from the discovery of a crypt on the north side of the temple, where, supposedly, ithe bodies of the rulers of Po‘p were transmuted, so that their ashes could be used to create spheres for the ritual of the ball game.

“After exploring the crypt, we began to investigate the south side looking for some symmetry in the architecture, which allowed us to find this disc, which had been embedded in the building, already transfered from its original site, probably an altar,“ accoding to the archaeologist.

The reading of the piece refers to the year 505 A.D. and to an event that takes place 260 days after the death of a Po‘p ruler – whose title is not legible due to the deterioration of the Maya hieroglyphic cartouche -, placing him in the underworld, as an incarnation of the god of corn.

“The personage appears seated on a throne, wearing a skirt of jade beads and a serpent mask headdress; he presents a dorsal support with a representation of the universe of three levels and four directions.“ 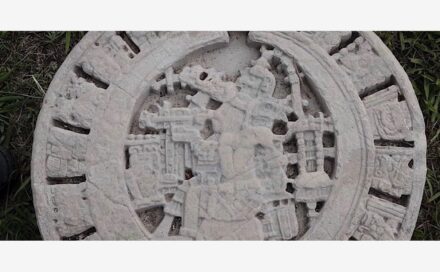 Another detail that associates the character represented with the God of Corn deity is that he is depicted dead, in the kingdom of the jaguar lord of the underworld, before his rebirth as the corn plant that accompanies the sun.

In this sense, Yadeun Angulo points out, the stone disc of Toniná – already safeguarded and replaced in situ by a replica – “is evidence of a shared religious tradition around the god of corn, the most important of the classic world,“ in association with the stucco sculpture located in the Archaeological Zone of Palenque, last May, in which the same deity is represented as a severed head.

The end of an era

In general terms, explains archaeologist Juan Yadeun, the histories of Toniná and Palenque ran parallel, which caused their apogee to lead them to an inevitable collision, which began in 687 A.D., when Yuhkno’m Wahywal, lord of Po‘p, was kidnapped and sacrificed in Lakamha‘, by K‘inich Kan Bahlam II, firstborn and successor of Pakal ‘The Great‘.

The reason for the war was not only the eagerness of Kan Bahlam II to obtain resources and slaves that would allow him to erect works as much, or even more lavish than those of his father. Both kingdoms had the aim to control the Usumacinta basin, since to dominate the waters was to dominate the agriculture, the economy and the life of the Maya Lowlands.

A year later, in 688 A.D., the monuments of Toniná register the ascension of the sovereign of K‘inich B‘aaknal Chaak, who was not a member of the dynasty, but an audacious warrior, whose goal was to create a large army of citizens to take revenge against Lakamha‘ (Palenque) and the nine minor lordships that had perpetrated the first assault.

Those 24 years of war were the final straw that put an end to the Classic Maya world, characterized by the rise of the great lords, to give way to an epiclassic era, in which small and numerous estates divided power.

Although Po’p‘s revenge was realized in 711 A.D., when K‘inich B‘aaknal Chaak sacrificed nine assistant lords of Lakamha‘ and took as prisoner the second son of Pakal, the loss of lives, both in the elite and in the population base, derived from each attack, brought changes in the daily life of the people, brought changes in the daily life of the two cities. The aftermath was a less ornamented architecture or new ways of representing the leaders in the monuments, who went from having celestial or mythical attributes, to only wearing warrior or ball player uniforms.

Palenque and Lakamha‘, Juan Yadeun concludes, were enemy cities that were worn down until they collapsed, however, the importance of archaeological findings, such as the two representations of the young corn god, corroborate the common base of beliefs and traditions that united them. 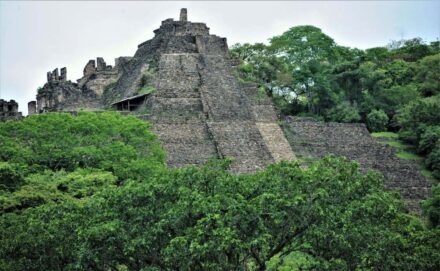