After many years of abstract sculpture, US sculptress Susan Falkman has now arrived at concrete themes, depicting climate change and the destruction of the world in marble 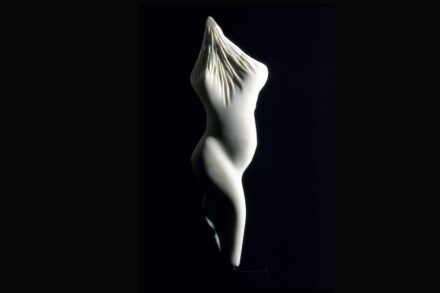 The viewer is confronted with great changes in the style of Susan Falkman when he peruses the page of the US-American sculptress: there are the large forms made of massive stone, unmistakably with echoes of nature or the female body, then one finds reliefs in which the stone is only centimeters thick, or finally completely abstract forms, which at first glance could be ceramic tiles for the wall.

In this diversity is probably a reflection of her life, and probably also had its beginning in the parental home: she had musician parents, in the living room there was a big grand piano, but no furniture and, of course, no TV, but the magazine National Geographic, through which she came to the U.S. Peace Corps, which took her on her as a volunteer for 24 months in a project abroad, from this arose the desire to look at the world, cultural and intellectual diversity. 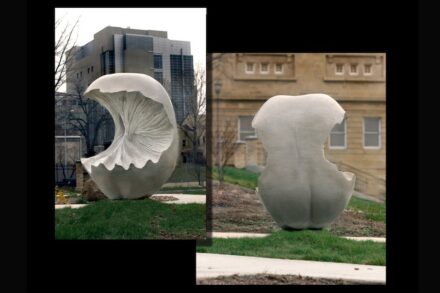 As a young woman she traveled, mostly in southern Europe, Turkey, and the Middle East, where she came across sculpture on the Greek island of Naxos: “Little light bulb went on, yes this is what I had to do.“ Then a stay in Carrara, for “several years … many chapters.“

For an exhibition she came back temporarily to Milwaukee, Wisconsin, met a man there, he came to visit Carrara when she was just forty, rethinking her life, she went with him to the U.S., “had a son at 45 and soon divorced and many more chapters.“

Based on the staccato style that comes through from her email response to our questions, one might think she was following someone else’s life from the sidelines of the field. 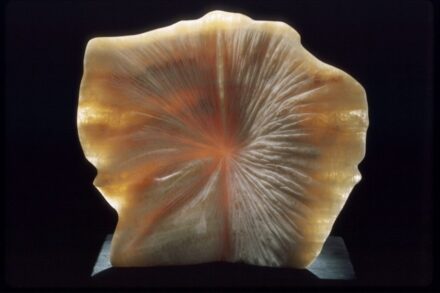 In fact, this view of an outside observer is also found in her art. The natural and feminine forms we mentioned above, she found all of them in nature or in the world around her: “It’s all there, seeds magnified, an amazing world of forms, the anatomy of flowers, all plants, every possible form is there. The landforms, the forms created by wind and snow, the mountains… the clouds… it’s almost overwhelming the shapes that surround us… the female body is just a part of it all, nothing for it to stand apart.“ 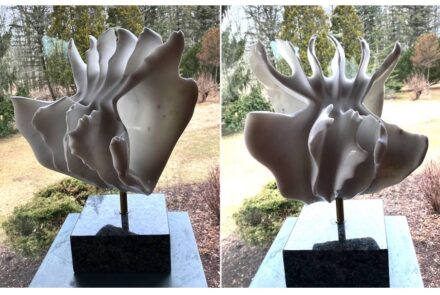 But the observation of nature and the processing of its manifestations is only one side of her art.

The other is her desire for expeditions and border crossings, both into life and into the material. 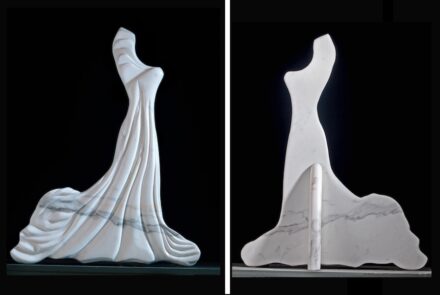 For example, in the series “Paper Doll Dresses.“ She came up with the idea, she says, after working in the studio on large-scale pieces made of local red granite and suddenly sensing her interest in a counterpart to such half-ton chunks. “My challenge is pushing the boundaries of stone, transporting a material of the earth toward the sky.“

Finally, her recent works. At first glance, we thought she had switched to product designers and was now creating artistic tiles in marble for wall coverings.

As for the rectangular shape of these artworks, we could see it that way. But this outer shape is symbolic of man, and the design of the surface of the rectangles represents climate change and the destruction of nature. 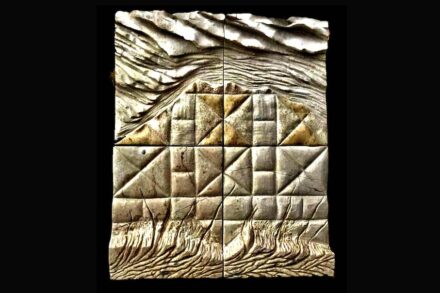 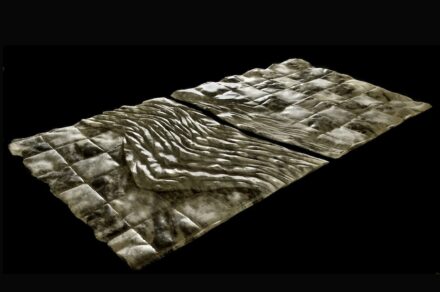 In “Upstream Downstream,“ she shows the land threatened by melting at the poles and rising sea levels; in “What lies beneath,“ she has a quilt symbolizing the comfort zone, a river rushing through and submerging comfort. 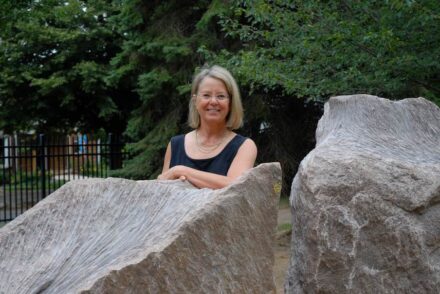