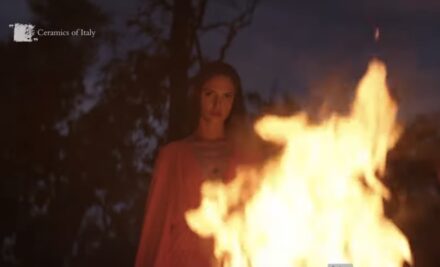 We occasionally look to the natural stone industry’s competitors to see what their associations and companies are up to. This time: the image campaign of the Italian ceramics industry:

“Ceramics of Italy for Sustainability“ is the slogan of the current image campaign of Italy’s tile manufacturers. It was planned long before the energy crisis and therefore shows all the more clearly what the industry is focusing on to appeal to customers.

A video in 5 languages is at the heart of the campaign.

“Earth, water, fire, air“, it says at the beginning of the compact film of only one minute duration. The aforementioned classical elements would be transformed in ceramics into new products made by human hands, the message goes. In the subtext, i.e., unspoken, it is said: ceramics comes from nature, and it is as old as mankind.

Then it continues with evocative images taken in different landscapes of Italy: they come from the nature reserve Salse die Nirano, from Lake Garda and later show – in great detail – olive groves. Short scenes from the production of ceramics are intercut.

As for the spoken text, it is, as usual with such commercials, free marketing jargon, which is not always immediately wrong, but likes to bring together things that do not belong together.

For example, the central point of the video is that ceramics have a long service life and that the high energy expenditure with over 1000 degrees of heat during firing pays off. The video then puts it this way, “Ceramics take less than one hour to be made, but last for decades…“

And at the end of that sentence, it says that the ceramics eventually “return to earth.“

The spot was realized by the Muse Factory of Projects agency from Milan. The entire campaign was developed by the Confindustria Ceramica association together with the Exprimo agency, and the social media activities were designed by the PPAN communications agency.

At the bottom of the campaign webpage, it states: “The campaign is wide-ranging in its scope and encompasses not only the markets with the highest levels of ceramic tile consumption, such as Italy, the United States, Germany, France, Austria, Switzerland and Benelux, but also countries and continents where Italian ceramic products are well known and popular but still have significant growth potential.“

By the way: pay attention to the colors of the young lady’s dress.

Webpage “Ceramics of Italy for Sustainability“