In the EU project NanoSafe, an inventory was made of the use of nano-materials on natural stone and in the construction industry 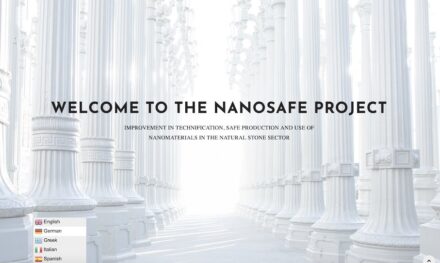 “NanoSafe“ is the name of an EU-funded project dealing with health protection in the use of nanomaterials in the construction industry. They can also be found on natural stone, for example as a means of consolidating historic facades. Manufacturers of engineered stones in particular advertise that their surfaces are bacteria-free thanks to nanotechnology, and natural stone companies have meanwhile followed suit and use such impregnations as part of their marketing.

The project, which ran from November 2020 to October 2022, first took stock of the use of nanomaterials in connection with stone and engineered stone and in construction in general. On the other hand, learning materials were created to inform employees and equally teachers at schools and training centers about the tried and tested protective mechanisms.

Do not get excited now, because: the conventional methods against fine dust in the workplace are also sufficient for nanomaterials. However: they also have to be used, and that is not for the best. “Especially among young people, masks, gloves, or filter systems are unpopular,“ said David Caparrós Pérez from the project at a final meeting in mid-October in Würzburg. He works at the Spanish Centro Technológico del Mármol (CTM) and knows the situation in the countries of the European south.

To attract young people in particular to this aspect of occupational safety and health, an educational video was developed for use with VR glasses (VR = virtual reality). In virtual scenes, the participant is given a task for which he or she must select the correct answer.

The fact that this learning method was chosen also has to do with image cultivation, as was said at the final meeting: the construction industry can use it to present itself to young people as modern. 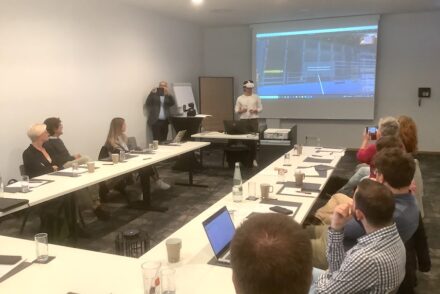 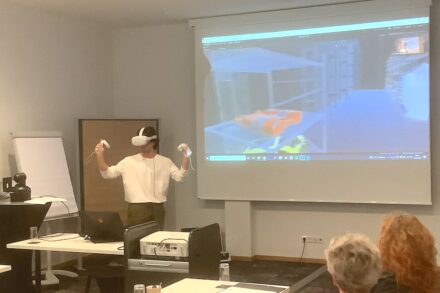 An entire catalog of VR scenes, as well as learning texts, will be available for download in various languages on the project page on the Internet. They can be found in the navigation there under the generic term OER (Open Educational Resources).

Nanotechnology was developed to recreate certain situations from nature. The most famous example is the lotus effect, which makes water drops and all dirt roll off the leaf of this plant. For this, the lotus plant has by no means acquired a particularly smooth surface, but, on the contrary, on its leaves, there are a vast number of tiny mounds that do not provide firm support for a drop of water so that it rolls off at the slightest breeze or bump.

The processes take place only slightly above the level of atoms or molecules.

This effect can be reproduced artificially with certain nano-molecules. For example, silicic acid, with which a stone surface is treated, strengthens the cohesion of the stone crystals. Titanium dioxide (TiO2) brings the lotus effect or the anti-bacterial effect. Today, many facade paints carry nanomaterials, as do numerous impregnations or water-repellent mortars. At the final meeting, Reiner Krug of the German Natural Stone Association presented a lengthy list of such agents.

They have been used for several decades. According to the current state of knowledge, they do not appear to pose any direct health risks. However, if a nano-treated kitchen countertop is cut, dust is created, and the nanomaterials are released in it. It is therefore essential to observe the usual occupational safety measures.

Many detailed questions about the cause and effect of nano are still open. Researchers at the Vienna University of Technology and the University of Oslo have therefore recently investigated in more detail what happens when a crumbling sandstone surface is treated with nano.

The finding: When this impregnation is applied to the surface, it penetrates the rock pores, where the water soon evaporates. The nano-molecules remain behind and form so-called colloidal crystals: they form bridges between the individual sand grains and thus give the rock additional stability.

Here, the smaller the nanoparticles, the more they strengthen the cohesion between the sand grains.

To illustrate the orders of magnitude we are talking about: one nanometer compared to one meter is as big as a soccer ball compared to the earth’s surface.

By the way: whether the use of nano is useful in every case remains questionable. For example, bacteria are all around us in immense numbers, so fighting them on the kitchen countertop is unlikely to have any real health effects.

Finally: the U.S. company Nano Stone, with operations in Korea, China, Japan, and Hong Kong, promises on its webpage to add “long-lasting fragrances“ to its stones, citing rose, lavender, and jasmine, among others.