Architects from Dutch firm MVRDV give two residential and commercial towers in Nanjing, China, the shape of leafy “Stratified Cliffs“ 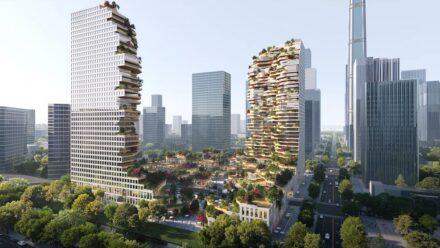 “Stratified Cliffs“ is the nickname that architects from Dutch firm MVRD gave their design for the planned forty-story Oasis Towers in the Chinese megacity of Nanjing. The two towers are constructed as residential as well as offices and business units and resemble cliffs as seen in storm-beaten banks around the world.

Another peculiarity is that almost none of it can be seen from the outside. This is because the towers stand in two corners of a triangular plot of land and show a rather boring perforated facade on the outside. Only inside the property, their facade consists of the cliffs on both towers.

The space in between is dubbed an “oasis“ by the architects.

This oasis, however, is set apart from its surroundings in Jiangbei New Area’s Financial District not only in terms of design but also in terms of urban planning: at some height, there is a new level with various functions that is planted: “it provides cooling and biodiversity, it offers privacy by shielding the residents of the upper floors from the shoppers below, and it creates a walkable environment that connects the two plots across the central road,” according to the press release. 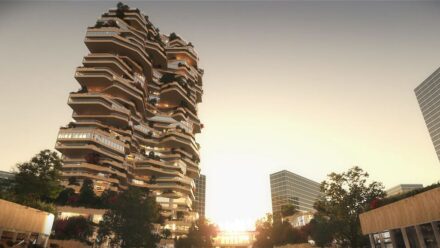 “The contemporary architecture of Nanjing takes its inspiration from nature in form and appearance,” says MVRDV founding partner Winy Maas. “With Oasis Towers we wanted to push this trend to the max – not only emulating nature with curving, stratified ‘cliffs’, but also to literally incorporate nature into the design with the greenery and by tapping into natural processes.”

Some of the Details:
* included in the non-accessible roofs are two 500-square-metre reed beds that naturally filter and clean water as part of the building’s greywater recycling system.
* The positioning of the towers takes advantage of the prevailing western winds to maximise natural ventilation.
* the deep balconies are staggered to provide plenty of natural light, while reducing solar gain in the summer,
* along with the carefully placed trees that provide extra shade in the warmer months.
* A water-source heat pump makes use of the adjacent river to reduce energy consumption. 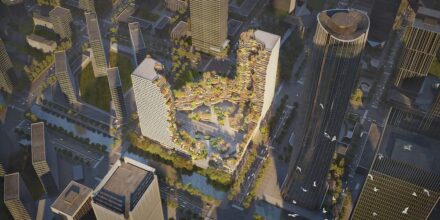 And last but by no means least: “The towers appear highly varied at a glance, with every floor differing in shape from its neighbours above and below, yet the design in fact is highly efficient and regularised; floor plans for large sections of the towers are almost identical, with only variations in the shapes of the curving balconies. Planters separate neighbouring balconies, ensuring that the green oasis extends to the very top of the design.”