With “The Henge,“ a modern stone circle moved into the Canary Wharf office complex during the London Design Festival 2022 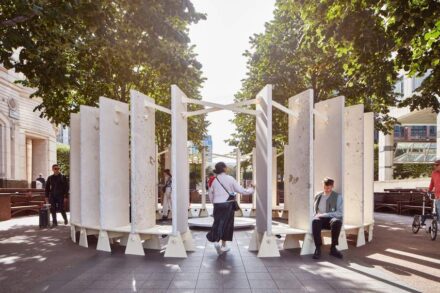 What is special about both the rectangular porticoes of antiquity and the round stone circles in the UK is that while they are open and inviting, they create an enclosed space. This interior space has a very special atmosphere or exudes magic, some say – in any case, a place is created, as it were, outside the world around it. Such a zone in the form of a circle was created as part of the London Design Festival 2022 so that office people or visitors could use it as a place for relaxation and contemplation.

The name was “The Henge“ about the world-famous stone circle near the English village of Amesbury. The design came from the architectural firm of Stanton Williams, and the engineering from Webb Yates. The stone was supplied by the Portuguese company LSI Stone. CEO Regina Vitório finds a component of the stone implemented in the project: “Alan Stanton in particular and his creativity took us into another dimension: to the abstract world of dreams and emotions.“ 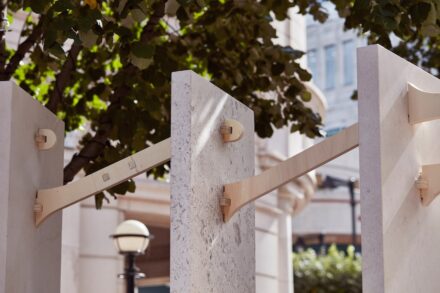 Shown was the modern stone circle in the heart of Docklands in the Canary Wharf office complex, where 3 of the tallest office towers in the UK are located and business characterizes the atmosphere.

The structure and the use can be understood at first glance. However, together with the requirement of a simple and demountable structure, some special architectural tricks had to be developed.

One of them was the design of the connecting arms between the stone slabs. They ensure that the structure, flexibly adapted to wind loads or impacts, is stable. Figuratively speaking, if one stone slab wants to tilt, the next one must move as well, and then the force runs over the slanted wooden elements around the circle in such a way that none can tip.

Another special feature is the wedges and tabs with which the joints are pinned. They make it possible for the construction to be completely without screws or glue. The material is plywood. 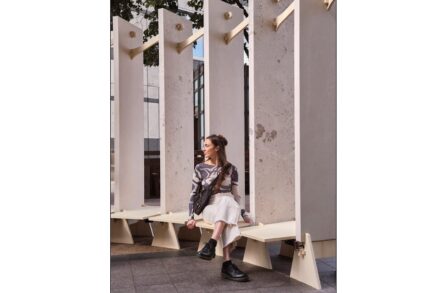 The architects chose it not only because it is cheap and easy to work with. They also allowed themselves an unusual side note about their use of the material: “Wood is strong and stone is light,“ so to speak, is their statement, which can be seen from the fact that plywood was used for the substructure.

However, this statement was only made with a wink. Because actually, the reason for the substructure was that the stone slabs did not have the height that was necessary for the aesthetic effect of the ensemble within the trees on site. 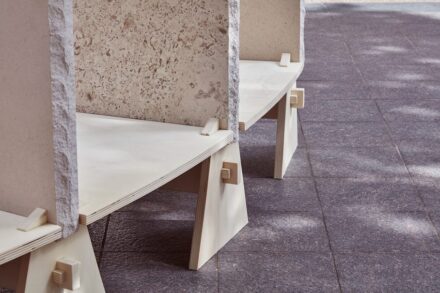 In addition, the desired benches could be easily integrated into the round of the stone slabs.

“The Henge“ was erected with the help of a small crane and assembled according to the modular principle. The circle consists of 30 stone slabs with a height of 2.40 m and a weight of 300 kg each.

Currently, the initiators are looking for further use, for example in a school that needs a theater stage.