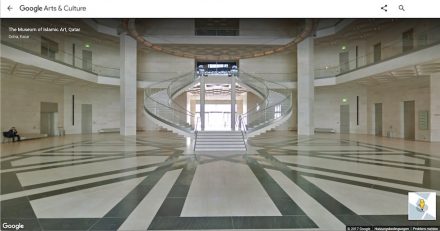 Google Arts & Culture is a data bank including some 2,800 museums which can be toured virtually. A number of other offers are also included. The navigation is at the top left, search button top right. The participating museums are listed under „Partner“. Here we show the entrance to the Museum of Islamic Art in Doha, Qatar.

Everyday items made of porphyry are exhibited in the Älvdalen village museum in Sweden.

Stone+tec in Nuremberg (June 13-16, 2017) is the first stone fair worldwide to open a newsroom to prepare the event. In online articles will be opened important topics of the branch to be finally discussed at the event itself (in German 1, 2).

„Marble – The Divine Stone“ is the title of a study on the use of natural stone over the centuries.

The Stone Museum in China’s Xianjiang Province likes to behold natural stone and precious stones from unusual perspectives. In 2016 it presented an exhibit of food made of stone. Now the building has won an IF Design Award in the category Interior design (1, 2).

North America, August 21st: the site of the next solar eclipse. 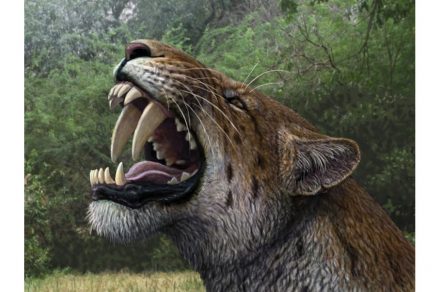 An almost complete petrified scull of a Machairodontin also known as „saber-toothed cat” (Homotherium latidens) was found in Lower Saxony in Germany. These carnivorous mammals from the family of cats reached the size of a lion and had extreme canine teeth. They were a common species in Europe about 300,000 years ago. The picture shows an artistic reconstruction of a „saber-toothed cat” by painter Mauricio Antón. Source: Senckenberg

Adatepe is a site on the coast of the Turkish Aegean with traditional stone monuments a 90 minutes drive from Cankkale with historic stone buildings (1, 2).

Intermac Italian producer of stone machinery has acquired 100% of Montresor, a specialist of edge-polishing machines, by August 2017. In July 2017, it had already bought Movetro company which is dedicated to the storage and handling of flat glass plates. At Marmomac, the joint venture will present „Thinkforward“ a project to create digital factories.

Video of the Month: in 1841, Edgar Allan Poe described „A Descent into the Maelström”, an actually existing vortex or maelstrom. Near Norway’s city of Bodø, tidal water must pass to the Skjerstadfjord through a narrow breach in the rock. An estimated 400 million m³ gush through the fissure in 6 hours before changing direction. Adventurous people use the phenomenon as a diving site (1, 2).