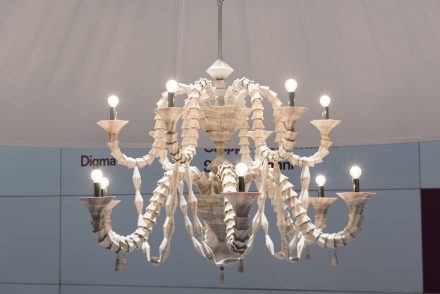 Stakes were high, to the point of qualifying for quantum leaps in working natural stone: whereas the playgrounds of Marmomac in its 7 years of „Marmomacc Meets Design“ and more recently 3 years of „Italian Stone Theatre“ were the setting for more or less experimental realization of projects in marble and the like, Hall 1 of this year’s Marmomac showed marketable products. Raffaello Galiotto had personally defined his „Macchine Virtuose“ (Virtuous Machines) in a concept paper.

Beholders are invited to decide the outcome and success of his endeavors.

Or, perhaps a suggestion: would it not be conceivable that the visitors use the opportunity to gather inspiration or even conjure their own innovative marketable products in or with natural stone based on the designer’s concepts?

Galiotto, in any event, opened a discussion about product ideas and the future of local designers in particular with regard to sustainability as an important aspect of excellence in design. Respect for material is a longstanding demand of his and pays credit to the millions of years since stone’s origin, a time span hardly fathomable to man.

In so doing, Galiotto simultaneously criticized the waste of natural stone, which has become almost a matter of course in luxury products and as such a trade mark of the Made in Italy branding.

With the title of his presentation, Galiotto also demands of his colleagues to keep up with the technological changes of the times and the potential of modern machinery. 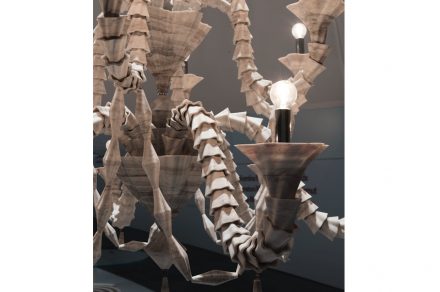 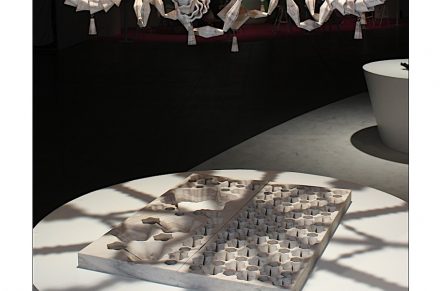 Take, e.g. the candelabra „Rezzonico“ whose origin was a marble slab 70×70 cm and 5 cm thick from which the single pieces were extracted by means of water jet technology. The pieces were mounted on a metal frame to a 137-cm diameter lustrum. Forerunner models are known from the Murano Glass Factories. 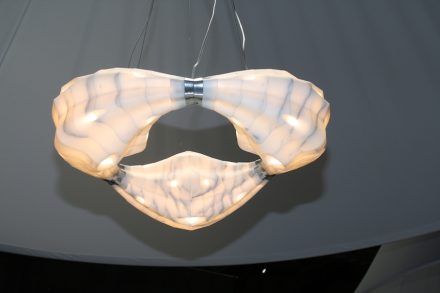 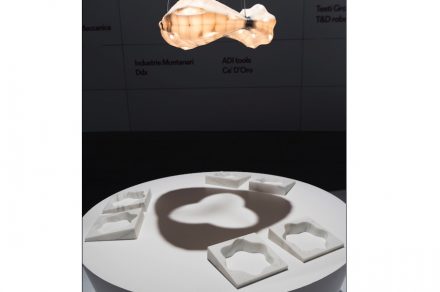 The lamp by the name of „Genesi“ was a demonstration of most effective use of material using optimal geometric shapes and waterjet technology for precision cut-outs. Six marble trapezoids in various sizes were cut out and combined to form the three parts of the lamp. The lamp is held together by means of wire running through the single elements.

What’s more: Last year’s work by Raffaello Galiotto entitled „Marmo 4.0“ is the subject of a book by the same title with detailed description in Italian and English (published by Marsilio, ISBN 978-88-317-2878-2). 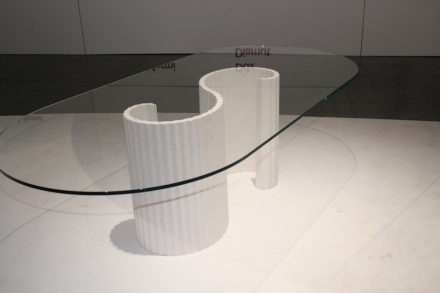 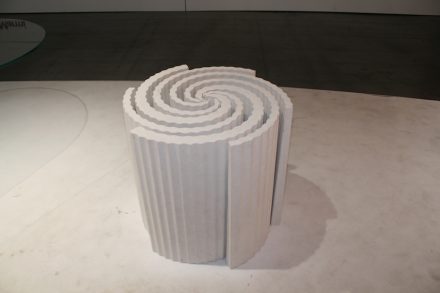 Table „Flexo“, Design: Raffaello Galiotto; Company: Margraf; Maschine: Pellegrini Meccanica; Material: Bianco Siberia by Margraf. Photo: Peter Becker
The double-spiral base of the„ Flexo“ table is made exclusively using a diamond wire to shape a single 80x80x80 cm marble block. The spiral is derived from the radial arrangement of eight elements, consecutively cut without producing scrap. The trapezoidal shape of the slotted spirals, right and left, allows the elements to be removed from the block and at the same time provides greater stability to the table base by lowering its centre of gravity. 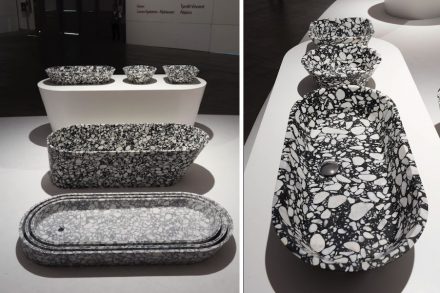 Bathroom-Collection „Easy“. Design: Raffaello Galiotto; Company: Vicentina Marmi; Machine: Donatoni Macchine; Software: Ddx; Tools: Diamut; Partner: Agape; Material: Palladio Moro by Santa Margherita. Photos: Peter Becker
The „Easy“ bathroom collection was conceived with the aim of using a cutter to produce stone containers with limited use of materials and working time. The project, elaborated with parametric software, allowed for simultaneous control of tool dimensional variables, thickness and inclination of the walls. The containers are made up of overlapping rings obtained from the same stone mass with a savings in material ranging from 50% to 70%. 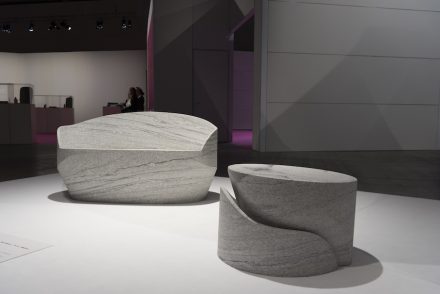 Street furnitue „Duo“, Design: Raffaello Galiotto; Company: Testi Group; Machine: T&D Robotics; Mastic: Ilpa Adhesivi; Partner: Metalco; Material: Duke White by Testi Group.
„Duo“ outdoor seats in natural stone are made with two diamond wire cuts on a 65x65x45 cm block.
The shaped backrest is produced at the same time by a cut for the machining of the seat, on which it is placed in the rotated position. The simplicity of the cutting operations is the result of a long work of computer design aimed at creating highly plastic three-dimensional elements with minimal machining. 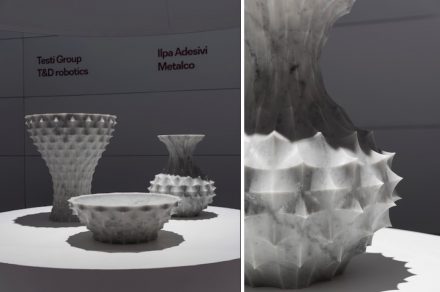 Vase „Cardo“. Design: Raffello Galiotto; Company: Denver; Tools: Digma; Material: Bianco Carrara.
The pointed cusps of the „Cardo“ vase collection are produced by milling along crossed pathways using a 60 mm diameter spherical diamond tool. Following the roughing process, the machine guides the tool along the three-dimensional lines designed by the designer on the computer, thus producing the surface, complex, smooth and cusped. As with external machining, the internal cavities are also produced by milling without manual finishing. 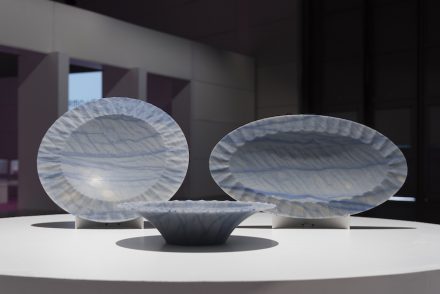 Plate und centrepiece „Volant“. Design: Raffaello Galiotto; Company: Gmm; Software: Licom Systems – Alphacam; Tools: Tyrolit Vincent; Partner: Atipio; Material: Azul Macaubas.
The entire work of cutting out and producing the decorative ornament on the edge of the centrepiece plates is made with a disc cutter. Diamond discs of different grains and diameters initially removed the material in a roughing operation and subsequently finished the surface with brushing. Each element is machined on the upper side until finished, then turned and worked on the underside to complete the entire production cycle. 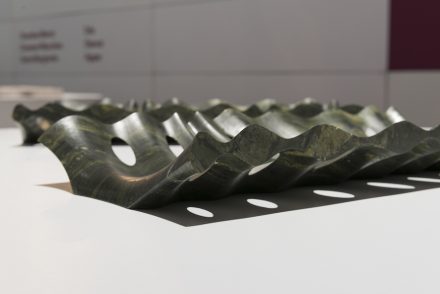 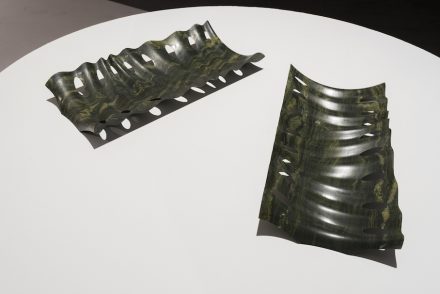 Centrepiece „Alveo“. Design: Raffaello Galiotto; Company: Industrie Montanari; Software: Ddx; Tools: Adi; Material: Verde Picasso by Ca’D’Oro.
The shaped and organic aspect of the „Alveo“ centrepiece is obtained through numerically controlled machining using a diamond disc. The geometric rigidity of the circular disc is transformed into sinuous surfaces with variable thickness thanks to the curved, tilted and layered line, designed on the computer using parametric software. The fine surface finish is produced by the diamond tool working on its own without further manual intervention.