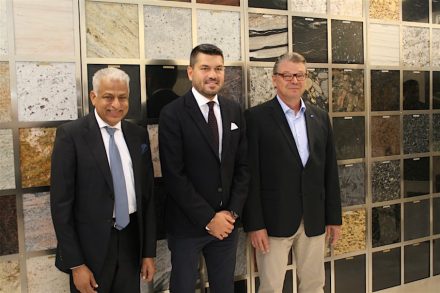 Baha Ali Şayakcı says in an interview with Stone-Ideas.com that the stone branch had taken the threat much too lightly

Wonasa, The World Natural Stone Association, presented its new executive team at the 2017 Marmomac Trade Fair: President of the Association is Baha Ali Şayakcı of Sayakcı Natural Stone, Turkey; Vice-presidents are Heikki Palin of Palin Granit, Finland, Sunil K. Arora of Aro Granite Industries, India and David Silveira of Granos, Brazil (not included in the photo). They will be in office from 2017 to 2019.

Wonasa was founded in 2010 with the aim „to promote and increase the use of natural stone in the world markets“, as per its webpage. The Organization counts 47 members.

The new President has the focus during his term in office as a battle against ceramics and engineered stone trying to copy natural stone by using names associated with known natural stone types. He stresses that he merely wants to undertake measures to stop „unfair competition“ not to go against the competition from various materials as such. His idea is to obtain protection for names like marble and granite – similar to the protection enjoyed by Champaign or Cognac. The best way to achieve this must first be found, he admits.

He is surprised that emulations are allowed at natural stone fairs. He draws a drastic comparison: „It’s as if the hunter and the prey or the perpetrator and the victim were presented side by side.“

But first the stone producers must develop „a stronger awareness“ of the threat.
Another central point of his work as President will be communication. With respect to the outward bound communication directed at the consumer his view is toward competition with emulated stone. „We must make consumers aware of the fact that engineered stone is merely a good copy of the real stone but a far cry from the original material.“

Within the branch he hopes for improved exchange of ideas and solutions between producers and trade organizations to surmount hurdles. It is not necessary to reinvent the wheel.