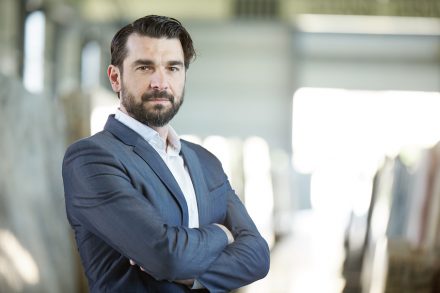 The Greek Marmor SG SA was a solid, well-run company when Antoniadis joined the team in 2004 and became its CEO. The years that followed gave him the opportunity to demonstrate his skills: the 2007 financial crisis was followed by the 2009 crash of the US markets. And 2010 saw Greece struggling with severe recession with Grexit written on the wall of prophecy.

By and by, the Greek economy is showing signs of recovery, but Ioannis Antoniadis has turned the family enterprise into a global player. Currently the company now called Stone Group International (SGI) employs 530 and a capacity to work 1,250,000 m² of natural stone per year.

Bankers and investors honored the entrepreneurial success story in 2016, when SGI received a 15 million € credit by the Black Sea Trade and Development Bank (BSTDB).

At Marmomac 2017 Ioannis Antoniadis, by now President of SGI, was awarded the title „Master of Stone“. The Fair honored „his ability to grasp the evolution of the market by organizing the company through innovative business planning. By concentrating on his extravert character, detailed knowledge of the material and the status of the world market, he managed to ensure that his company is among the leaders in the world”. 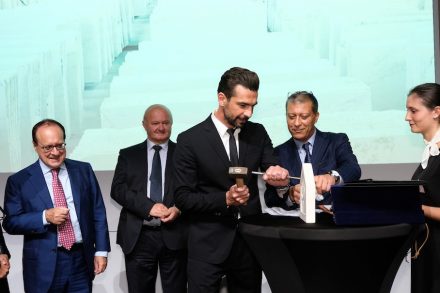 A retrospective glance: in 1981 Ioannis’ father, Thanasis Antoniadis, founded the Marmor Kamin SA company based in Thessaloniki in the North of Greece. The company specialized in fireplaces made of natural stone and marble custom made work. With great skill and craftsmanship, the company grew quickly. Less than one decade later, in 1990, it began exporting goods to Russia, Cyprus, and Belgium.

This was the year the company added the name Marmor SG SA and moved to its current headquarters in Kavalari, a town on the outskirts of Thessaloniki covering a surface of 50,000 m².

At the time, Ioannis was studying at Thessaloniki University’s School of Economics.

He adapted the theories on modern corporate management to the realities of an upwardly mobile Greek stone producing company, and open to modern concepts: when his marketing team came up with the idea of „12 Mythic Marbles” he was convinced. New types of stone were paired off with ancient Greek mythology and the quarry backdrop. The idea was honored at the 2014 Marmomac with the Best Communicator Award and received numerous other prizes for outstanding marketing and design.

The last year brought the novelty of the Pirgon Marble campaign: The variety of surface structures availed itself to a comparative concept by the marketing department drawing similarity water phenomena like to rain or fog.

This year’s craze was head mounted displays with a showing of the company’s quarry in virtual reality.

In a company paper Ioannis’ corporate strategy is summed up as follows: „His vision for the Group is to become a global, leading, client-centric supplier of exclusive and value-adding marble products that fosters innovation and inspire relationships of trust and commitment to total excellence.“

Ioannis is married and has two children.

The Master of Stone is awarded every year by Marmomac in memory of the tradition of the Ancient Free Guild of Stone Arts in Verona dating back to 1319. The insignia is a cube of Verona red marble with a bronze plaque of the Guild and a silver chisel.